Owusu Bempah reveals why he removed his ‘occult’ ring 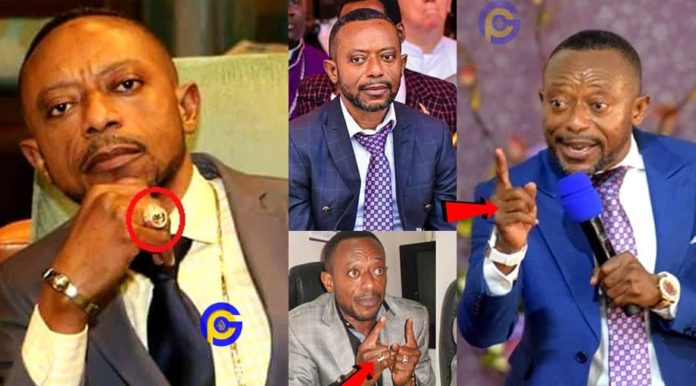 The founder and leader of Glorious Word and Power Ministry International, Reverend Isaac Owusu Bempah has disclosed the reason behind his decision to remove his ‘occultic’ rings.

According to the man of God, it is by the power of God manifesting through him to deliver his people which led him to remove the rings.

The man of God also stated that he is a true prophet from God who abides by the teaching of the Holy Bible.

“God exists and I am a living testimony. You might not believe me but I swear to God, my spirit, body and soul stand as proof that I am speaking the truth.

I have prayed to Jesus and performed miracles without any satanic powers. It got to a time people were talking about the rings I was wearing so I had to take it off“, he stated.

ALSO READ: ‘Stealing a bracelet’ to a ‘husband snatcher’~Five scandals that nearly broke down Emelia Brobbey (Watch video below)

Owusu Bempah also advised his congregation to believe in the name of Jesus as he is a living testimony regarding the miracles he is able to perform.

The man of God is popularly known for revealing prophecies at the end of every year with the recent one stating that the President of the Republic of Ghana, Nana Addo Danquah Akufo Addo will win the 2020 elections.

According to him, it is the will of God and that no man of God can turn this prophecy.

Man beats girlfriend for saying ‘No’ to his marriage proposal

Video of a lady feeding her mad boyfriend warms hearts