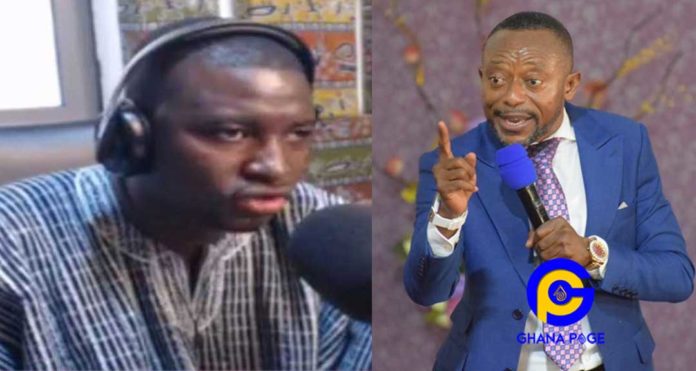 The founder and leader of Glorious Word Power Ministries, Reverend Owusu Bempah has reportedly stormed the studio of Accra based Radio XYZ to find the presenter, Mugabe Maase to ‘finish’ him.

According to the report, Owusu Bempah did not go to the studio alone. He went in the company of other armed men whom some of the workers at the station are alleging they are National Security Operatives.

Speaking to Rainbowradioonline, one of the workers at the studio said:

“When he arrived at the premises he threatened to shoot anyone who would distract him. Where is Mugabe? He thinks he is powerful eh? I will finish him”, Owusu Bempah is reported to have said.

“The guys he came with nearly shot in the air. One lady who tried filming the act got her phone ceased,” the eyewitness added.

Following Owusu Bempah’s recent prophecy that the former president of Ghana and current candidate of NDC, John Mahama is planning to kill some top officials of government including Vice President Mahamadu Bawumia, Mugabe Maase has been attacking Owusu Bempah describing him as a fake prophet and bleached pig

It as a result of his constant attack on the controversial man of God that the man of God stormed the Radio station to ‘finish’ Mugabe Maase; Ghpage.com has been told.