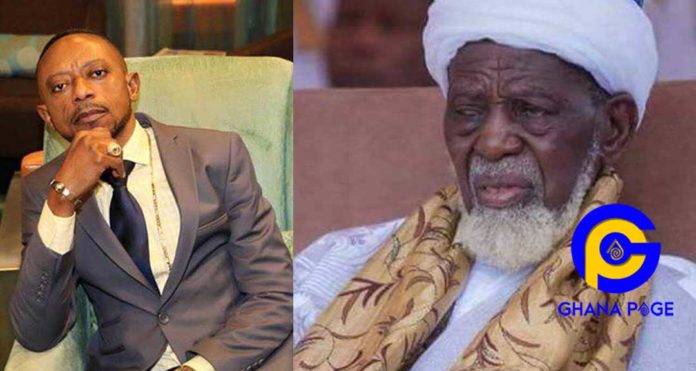 Reverend Owusu Bempah, the founder and leader of Glorious Word and Power Ministry has paid a courtesy visit to the home of the National Chief Imam, Sheik Usman Nuru Sharubutu to thank him for his swift intervention after irate Muslim youth attacked his church following his death prophecy on the Islamic leader.

Owusu Bempah acknowledged the National Chief Imam as his father and thank him for the love shown him after a prophecy during his December 31 church service suggesting he will die this year.

The controversial man of God revealed that without the swift and timely intervention of the National Chief Imam, things may have taken another twist which could lead to harm and destruction.

SEE ALSO: Meet John Ackah Blay-Miezah the man who invented ‘419’ and robbed millions of people all over the world – NAM1’s ‘Grandfather’

The Chair of the Chief Imam’s Advisory Board, Gado Mohammed thanked the pastor for showing interest in maintaining the peace that has long existed between the two faiths.

“Muslims and Christians all have faith in God that is why they are referred to as faith people…the peace that we have had in this country is not anything like others have had in many other countries.

“This is because the two faiths are at peace with each other and we should not take it for granted. We have worked for it,” he said.

Owusu Bempah did not visit the Chief Imam’s Fadama residence in Accra on Thursday empty-handed, he went with a cow to be given to the National Chief Imam as a thank you gesture.

The man who calls himself the Nation’s Prophet promised he and his team will find another time to visit the Chief Imam to further strengthen the relationship between them.

SEE ALSO: Chief Imam hails Rev. Korankye Ankrah after he preached on the living in harmony with each other

Owusu Bempah on 31st December watch night service prophesied that the National Chief Imam might die in 2019 and Ghanaians should pray for him to avert it.

Angered by this prophecy, some angry Muslim Youth stormed his church and destroyed everything in their path. the razed his church Signboard to the ground and vowed to ‘drink Owusu Bempah’s blood” until he apologizes.

These Irate Youth streamed their attack on the church on Facebook Live. The leader of the angry youth surrounded to the police when they were declared wanted. The rest were later brought in.

SEE ALSO: Meet John Ackah Blay-Miezah the man who invented ‘419’ and robbed millions of people all over the world – NAM1’s ‘Grandfather