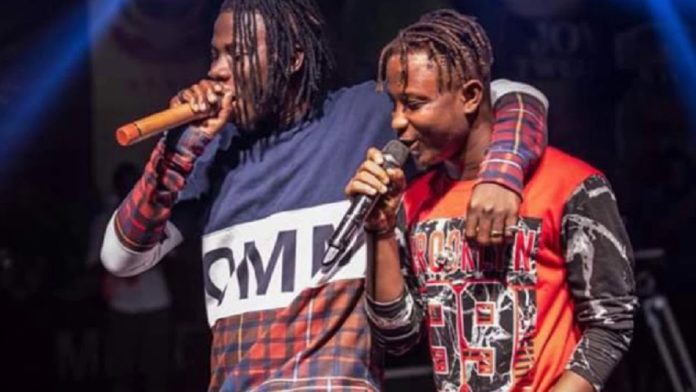 Former member of Burniton Music Group, Kelvyn Boy has finally spoken about his exit from the music group.

In an interview with Andy Dosty on Hitz FM, the “Mea” hitmaker disclosed that he paid almost 80% of his videos he shot under Burniton Music Group and has never complained about it.

He stated that his management has no idea where he lives and has always been grateful to Stonebwoy and his team.

Kelvyn Boy stated that he confronted Stonebwoy about tagging him as ungrateful and asked why he was tarnishing his image.

“I paid 80% of my videos and it comes out with Bhim Nation tag but it doesn’t matter. Stonebwoy has really helped me but the rest is me. My management doesn’t even know where I stay. I’ve always been grateful to him. In my videos, on social media and everywhere, how can Stonebwoy say I’m ungrateful?

And that’s why after Stonebwoy’s interview on Hitz FM claiming I was ungrateful, I texted him and asked him not to tarnish my image. He, Stonebwoy knows I’ve always been grateful to him, and so why was he telling the media and the public that I was ungrateful”, Kelvyn Boy stated.

Kelvyn Boy added that he actually doesn’t have any idea on what he has done to show that he has been ungrateful to his boss.

He further stated that everything was fine in the group until the new management was introduced and has no idea as to why he was axed from the group.

Kelvyn Boy later rendered an unqualified apology to Stonebwoy and added that he will always be grateful to him for showing him to the world.