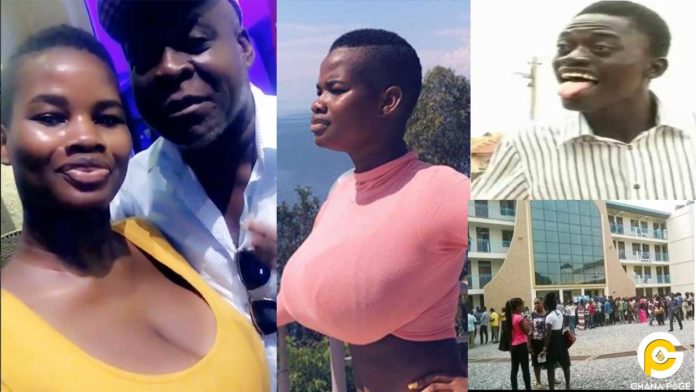 Ghanaian video vixen and popular Instagram model Pamela Odame Watara is trending after her adult video went viral and it seems her woes are not ending soon.

This afternoon in the studios of Peace FM, the Instagram model was there to clear the air on the n*de video which is spreading like a wildfire.

This was brought up after checks by panel member, Ola Michael revealed that Pamela had lied about being a student of Wisconsin.

According to Ola Michael, Pamela only goes to the campus to visit her boyfriend who is a student of the school but Pamela insisted she is a student but failed to give enough proof to defend her claim.

According to Pamela, her school ID number is 15 but she had forgotten her student ID at home.

It got heated to a point Pamela said she cannot continue the interview anymore—which at that point it was clear, the shame was too much for her to contain.

The SRC president was later called on the phone to clarify things which she revealed that ’15’ is not a student ID number because their format doesn’t match what Pamela said.

Read also: Kuami Eugene’s mum gives him a big surprise on his birthday

She(SRC president) further revealed that she once met Pamela on campus after she was introduced by a friend as the girlfriend of one guy in the school. She later requested to speak to Pamela but she had left the studio already after being exposed.