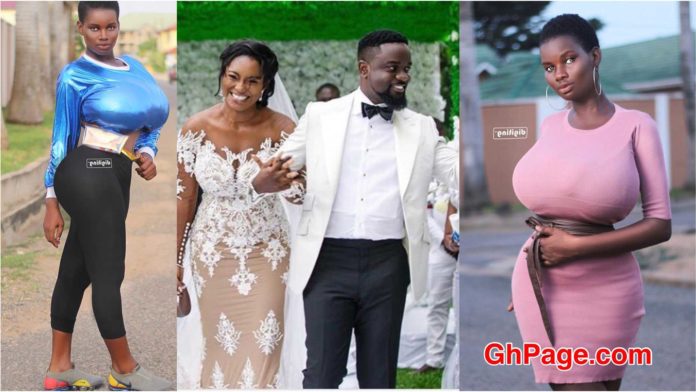 According to Pamela, she likes Sarkodie for several reasons with his gentle nature being one of them and if they (She and Sarkodie) can reach an agreement she wouldn’t mind being the second wife the rapper at all.

SEE ALSO: Meet Bukom Banku’s girlfriend, Kate, who is a nurse and her prayer is to become the second wife (Photos)

Pamela Odame Watara explained that, although she may not really like being the second wife of anybody, she can make an exception for the husband of Tracy Sarkcess any day.

The Instagram model who is gradually shifting to acting revealed that Sarkodie was already married to Tracy before she met Sarkodie and became his friend so there was no way she could have taken the center stage in Sark’s life.

Listen to Pamela Odame below

A few months after hot and super sexy photos of the big breasted model went viral on social media and got people talking, the young lady’s [email protected]*tion videos got leaked on social media.

In an attempt to deny she was the person in the video, she was disgraced and exposed by the movie producer, Ola Michale after she lied about being a student of Wisconsin University.

SEE ALSO: I can’t wait to sleep with my wife’s sister when I marry – Guru

Despite these “Major” setbacks in her life, Pamle Watara keeps turning heads on social media and she has been cast in a couple of Kumawood movies.