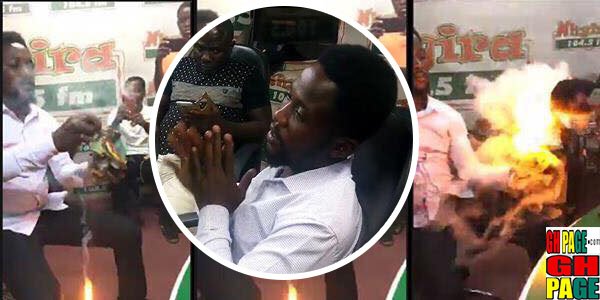 The ‘changed’ pastor was at the studios of Kumasi based Nhyira fm to demonstrate some tricks and the magic most of the pastors he claimed use in Ghana.

In what he described as a trick, he commanded a fire to burn a handkerchief live in the studio to prove that indeed he as knows what he is talking about.

He stated that a lot of the pastors who claim to have commanded a fire from heaven to burn something to demonstrate some sort of a power is all tricks.

According to him, he started visiting shrines at the age 9 and when he turned 15 years, took a lot of pastors to Benin to get power from shrines.

The pastor who said he is now a changed man added that Christians should be wary of fake pastors as most of them are using different sources of power which is contrary to what the preach to get money from their followers.

Also, Togbe Kedinakpo Cuts his stomach and Heal it at once in a magical display at Asantehamaa’s funeral(Video)