Pastor halts ceremony to wipe off bride and bridesmaid’s makeup 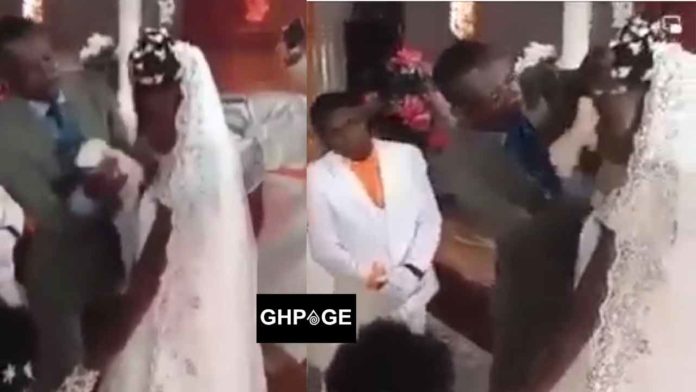 The wedding ceremony of an unidentified couple was brought to a standstill as the pastor officiating the marriage wiped off the bride’s makeup.

In an embarrassing video that has been widely circulated, the pastor was seen wiping off the bride’s makeup vigorously with a washcloth.

The pastor halted the ceremony while the couple were about to say their vows and angrily wiped off the bride’s makeup.

He also ordered the bridesmaid to scrape off the bride’s nail polish while the other pastors and congregation laughed on.

The pastor then went ahead to conduct such an embarrassing act on the bridesmaid and forcefully removed her false lashes as well.

The groom, on the other hand, stood on the altar unperturbed and watched his wife-to be disgraced in front of the congregation.

The video has sparked outrage on social media and the actions of the pastor have been questioned.

Read some reactions below;

banksbmpro stated; “Ridiculous….. The way Women have been Conditioned for Abuse”

an_ge_li_na_stan said; “What kind of rubbish is this? In the public? She’s yet to step into the marriage and she has started to endure nonsense! This type of man is a dream crusher, you have to dance to his tone on everything at the detriment of your happiness or opinion”.

empressinteriors1 had this to say; “Imagine the humiliation on her wedding day? Africa and backwardness ??????????”.

thesheriffshow also added; “The entitlement men have over women… it’s mind boggling how we allow them to get away with so much. The audacity. Is make up a sin?

seunobajolu commented; “Some of these pastors are given way too much power! Religion just makes some people lose their brains”.