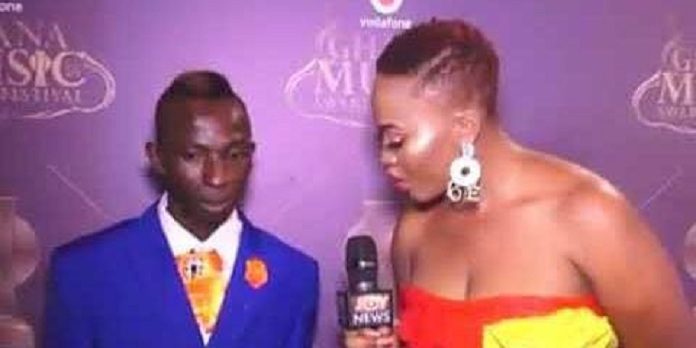 Swedru based artiste Patapaa, has apologized to Charterhouse, organizers of the Vodafone Ghana Music Awards (VGMAs)after he made allegations that they had taken “stupid money” to cheat him out of winning the most popular song of the year.

After the 19th edition of the VGMAs, Patapaa who was very optimistic of winning the popular song of the year got the shock of his life when the award went to Fancy Gadam for his “Total Cheat” this didn’t go down well with Patapaa who stormed out of the auditorium in anger.

Also Read: You Dance To “One Corner” But Still Say Its Senseless – Patapaa

Patapaa was then interviewed some minutes later were he alleged that Charter House took “Stupid Money” to give the award to Fancy Gadam.

Organizers of the awards, Charter House also in a different interview asked Patapaa to provide evidence that he was cheated or do the honorable thing by rendering an unqualified apology for his baseless comments that has tarnished the company’s image.

“If Patapaa has an evidence of us taking money from any nominee, he should release else he should apologize to the board, academy and the general public for that comment,” the Public Relations Officer of Charterhouse, George Quaye told a section of the media.

“We will release the votes very soon so that we all see how everybody performed on the night. It is a very unfortunate statement from him.”

Patapaa in an interview with Bola Ray on Starr Chat on Starr Fm Thursday rendered an unqualified apology to Charterhouse explaining that he made those comments out of anger, adding that he deeply regrets his action.

“I apologize to Charterhouse, that very day I was not myself…I was very disturbed and my fans were sad as well. I felt like going out of the auditorium and the media pushed me to do an interview, I know I didn’t speak well. Please forgive me, I’m very sorry,” Patapaa said.