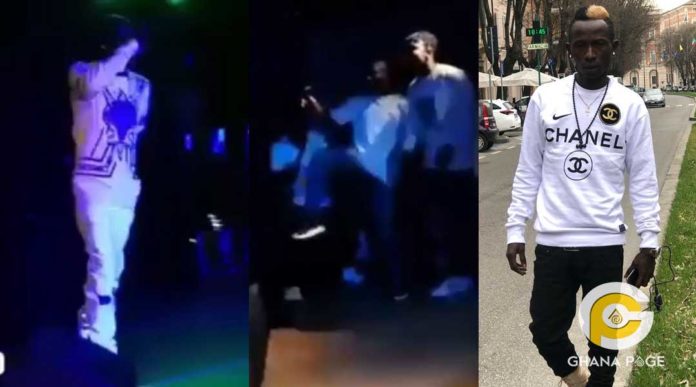 The tour manager of Ghanaian hiplife musician Patapaa identified as Nana Amoako has disclosed the actual number of people the musician performed to in Norway.

Patapaa’s tour manager refuted reports that the ‘One Corner’ hitmaker performed to only three fans in Norway.

According to Nana Amoako, he was able to count 16 people at the venue including the promoter making it 17.

ALSO READ: Patapaa performs in front of less than 7 fans in Norway

“Upon entering the event hall I saw sixteen people, I counted, I have everything on my phone, I took footages of everything, the people who were there.

So when I entered and saw sixteen people, including the promoter, making up to 17, I was like wow, this guy is not going to pay us”, he disclosed.

Social media users mocked Patapaa after a video of him performing to only three people while he was on a tour in Europe went viral.

Patapaa shared the video on his Instagram page and was seen performing one of his latest songs to just three people.

The Swedru-based musician who refused to speak to journalist upon his arrival at the airport disclosed that the rumours about him performing to only three people is not true.

According to him, he was furious with his tour manager over some monetary issues and later apologised to the reporters he snubbed at the airport.

The daughter and firstborn of actress Nana Ama Mcbrown known as Baby Maxin is celebrating her first birthday today and her celebrity...
Read more