Patapaa though wasn’t there but steals the show as Mr. Eazi performs Akwaaba at Ghana party in the park London 2018 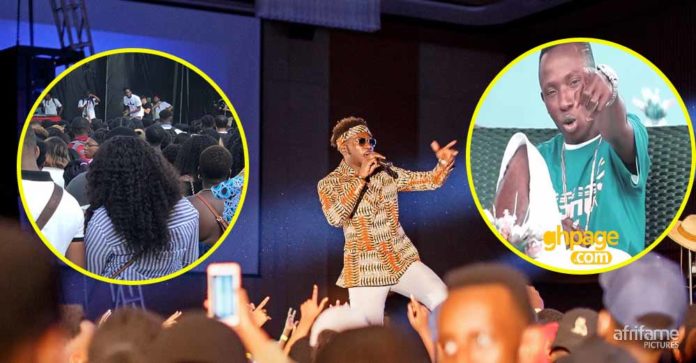 Nigerian artiste Mr. Eazi who is currently enjoying his Europe tour yesterday thrilled fans in London with his performance as Pataapa the ‘one corner’ hitmaker though was not there —stole the show at some point.

The akwaaba song composed by Eazi, Pappy Kojo and Patapaa made waves at the recently held Ghana party in the park party,2018 organized by Akwaaba UK at Trent Park in cockfosters , London.

The party saw performances from artiste like Mr Eazi, Kidi, Bisa Kdei and Kuami Eugene, as those at the Trent Park wiggled their waist and danced to the various performances. But one song which stole the show was the ‘Akwaaba’ song.

Surprisingly, Patapaa tho was not at the party or performing but as the song got to his verse the audience got crazy.

The singing along, the cheers and shouts just went up a notch higher, with all sorts of moves from the numerous people gathered as they danced the akwaaba dance.