Patience, the woman who was assaulted by the Police Officer speaks 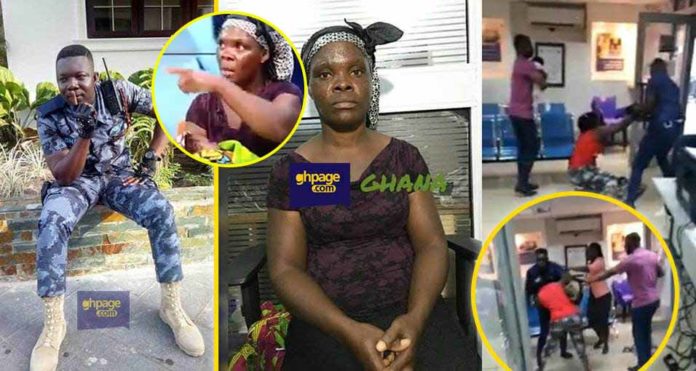 The woman identified as Patience who was seen in a viral video being assaulted by a police officer named Frederick Amanor aka Skalla has finally narrated what happened and led to such a barbaric act.

The nursing mother in an interview on Peace 104.3 FM and as monitored by GHPAGE.com stated that she has been going to the bank to redraw her money since last Friday but was always turned away with the excuse that the network was down.

She said, was at the bank by 7:30 am yesterday but was not attended to until after 4 pm. She was told to leave which she refused and later resulted in the assault.

She continued that, she refused to leave the bank yesterday because she was asked to come back for the money after being tossed for several days and even was too broke to leave.

The woman who is nursing a two and half months old baby said she sells toffees and tissue at Spanner Junction to feed her kids but was at the time too broke which so needed that money for their livelihood.

She even had to borrow 60 cedis to pay school fees when the bank started tossing her since last Friday.

She added that an unknown man impregnated one of her children who is mentally challenged and is now taking care of her grandchild and three more children so needed her money she had deposited at the bank so bad.

According to her, she had earlier told the policeman to give her just 25 cedis to buy a lactogen for her child, so if the bank finally gives her the money she will refund it back to him — which the policeman gave her a cheeky response that “Am I the one you had the child with”?

To her, it was after that volatile response, she started feeling there might be a danger ahead.

She reiterated that she had been there on several occasions but the bank refused to redraw her money for her but as for yesterday was determined to redraw because was too broke to go back home with nothing.

It was after the 4:30 pm, the police officer wanted to force her out which resulted in what we saw in the video.

The bank gave her the money after the assault. She was paid 270 cedis.

Listen to the interview below;