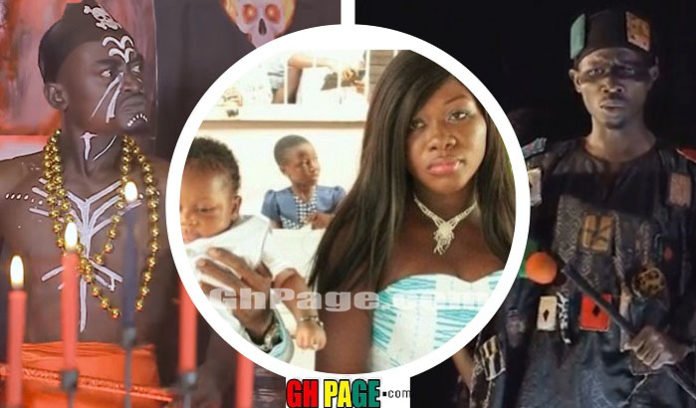 Patricia Afriyie, the wife of Kwadwo Nkansah Lilwin speaking exclusively with Ghpage.com revealed that Top Kay, the fetish priest was the one who gaged her from speaking out when Lilwin threw her out of the house. SEE DETAILS

She further revealed that Top Kay threatened to strike her down spiritually if she ever comes out to complain about how Lilwin was treating her or to admit publicly that she has been thrown out of the house by Lilwin. SEE DETAILS

Since Patricia Afriyie came out to publicly admit she has been sacked from her home by Lilwin and to make it worse, Lilwin has moved into their matrimonial home with his girlfriend Sandra Ababio, Ghanaians have not taken it kindly with Lilwin.

He has been called all sort of thems by his fans including an ingrate, greedy, selfish and other unwholesome names.

Well, Top Kay has come out to tell the public his side of the story. According to Top Kay, all the allegations Patricia is making against Lilwin and him are all false.

Explaining, Topkay revealed that Lilwin didn’t sack the wife from the house himself but rather it was Lilwin’s parents and his siblings who threw her out in his absence because she cheated on Lilwin.

Even that, Lilwin ranted an apartment and bought a RangeOver for her. But checks down by Ghpage.com as at today proves Patricia Afriyie still lives in a rented single room and has no car.

Before Top Kay ended his conversation he revealed that Patricia Afriyie has the habit of visiting several other fetish priests and his (Top Kay) spirits always reveal to him and he tells Lilwin about it and that is why she hates him.

Listen to the exclusive interview Ghpage.com had with Patricia below;

SEE ALSO: [Video]Lilwin’s cheating galore; “I have not even gotten 1 cedi from the “ladder collabo”; Meanwhile Lilwin and his squad are performing shows behind my back – Odehyieba

Share
Facebook
Twitter
WhatsApp
Previous articlePhotos+Video: These Two Young Ghanaian Brothers In Koforidua Have Built A Three-Seater Car and We’re Super Excited
Next articleThese 6 Ghanaian diminutive actors and their ages will surprise you