“Paul Adom-Otchere is our enemy, a termite” – Asogli State declares 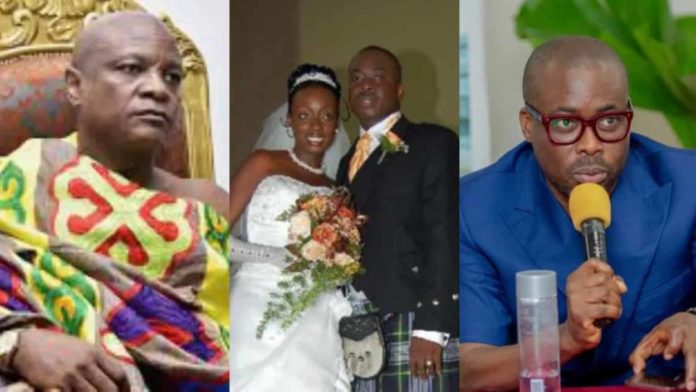 The Asogli State Council has referred to Paul Adom-Otchere, the host of Good Evening Ghana, as a “big termite” and an “enemy of the Council.”

The Council is dissatisfied with the ace broadcaster’s behaviour, according to the Council.

This comes after his previous remarks on Togbe Afede XIV, the Agbogbomefia of Asogli State and President of Asogli Traditional Area.

Togbe Afede, contrary to Paul Adom-earlier Otchere’s comments, is a man of conviction, according to a statement released following a news conference on Wednesday, June 15.

As a result, they are baffled as to why he made harsh words against the revered traditional leader.

As a result, the Council declared their disassociation from the journalist, labelling him an adversary.

An excerpt of the statement read:

“Paul Adom-Otchere has publicly admitted knowing Togbe Afede XIV for some time now, visiting him from time to time and asking for financial and other favours from him. What a great friend Paul had in TOGBE AFEDE XIV.”

“We the people of the Asogli State have tracked Paul’s attitude, his beliefs and style and identified him as a GREAT TERMITE working on the roots of our beloved tree, Ghana.”

“The Asogli State is a respected Traditional Area and will not allow evil-hearted people like the kind of Paul Adom-Otchere to denigrate our KING and the “Rising Star of this country.”

Read the Full Statement Below…

Paul Adom-Otchere said Tigbe Afede only added a car to his fleet of 14 cars lineup for his wedding. Thus, the wedding could still have gone on if Togbe Afede had not given him the car.

He claimed that two of the 14 cars belonged to him, including a Mercedes Benz C-Class, and the others were donated to him by friends, including Dr Kofi Amoah, who also gave him a BMW 7 Series.

On the Good Evening Ghana show, he narrated:

“I was talking to Togbe Afede about this wedding, I told him that Kofi Amoah is giving me his car, BMW Seven series, for the wedding. At this wedding, I had about 14 cars, two of them were mine, and the rest were given to me by people.

“When I said I was going to get married people blessed me; I was favoured,” Mr Adom-Otchere said yesterday on his show.”

“I said that Togbe, Kofi Amoah is giving me his BMW 7 series – Kofi Amoah’s car and Togbe’s car were exactly the same – so, I said I need your car so, that when the thing opens, the two BMWs will come then the Mercedes will follow. I just wanted to show off. My car was Mercedes.

With the part that has to do with his law school fees, Paul Adom-Otchere said he received the cheque from Togbe Afede long after he had settled his fees.

“…Do you know how many people have given me school fees money? So, what is the point about that? I don’t even get it but anyway people wanted me to react to it”.