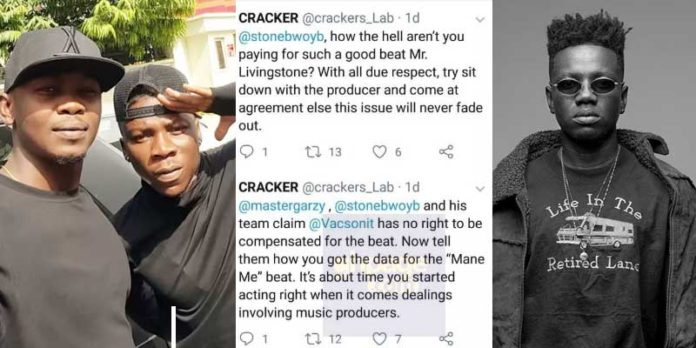 Just a month ago, music producer, Vacs, producer of Stonebwoy’s ‘Mane Me‘ song expressed his displeasure for the reggae/dancehall artiste not paying him for the beat to the song and it seems he is not giving up the chase to get his money.

In a long Facebook post, Vacs who once revealed that all he got was a credit and an acknowledgement on the cover of the album, Epistles of Mama, but apart from that, there has been nothing like appreciation nor money from him narrated his ordeal with Stonebwoy.

According to him, it’s not surprising to him the Zylofon Media recording artist, Stonebwoy has resorted to spreading a screenshot of a conversation they had earlier as a defence and has learnt his lessons well and wouldn’t let history repeat itself in the near future.

Read also: Stonebwoy and manager threatens producer they refused to pay for the “Mane Me” beat

He added that the question still begging for an answer is “Did you pay Vacs for producing mane me?”

The music producer extraordinaire who claim his beat worked over 70% magic on the “Mane Me” song advised his colleague producers to sign an agreement contract with musicians to avoid such unfair treatment like his.

“The beat for “mane me” was sent to DJ mingle by myself when he reached out he wanted to do a song, he asked for ma opinion on which artist would be best featured on it and I suggested Stonebwoy. I later got a call from garzy that they needed the data to mix the “mane me” track because what I sent to DJ mingle cannot be used in mixing the track. I sent the data to Garzy coz he said Stonebwoy was going to get the song mastered with an mp3 format that was sent via WhatsApp. I taught about my brand and also I was genuinely excited my production was going to feature on a big album like EOM.”

“I reached out to Stonebwoy after that to let him know I was happy to be on the album and how I would love to help him with good productions like the “mane me” beat in future. It obviously the beat did over 70% of the magic.”

“I was called for an interview to speak on the changes in line with music production which has moved from artist coming to sing for you before the beat to producers sending artist beats. I was asked if I was paid for producing the “mane me” hit track which I answered it as it is, NO.”

“After the interview, I received several phone calls from different people telling me I shouldn’t have said no when that was the truth. I later received a phone call from BlackCedi who was very angry I said that during the interview. I explained to him that it wasn’t deliberate though I was not paid for producing the track. I was surprised when he said “You can’t fight bhim nation. I wouldn’t have even comment on that if I was not asked about it in the first place. Blackcedi then said he was going to call Stonebwoy so I apologize to him which I rejected because I didn’t see the need to apologize for telling the truth or being open in the interview. I heard garzy on radio saying he heard the news and spoke with stonebwoy so I have been sorted out.”

“I reached out to Garzy and he asked for invoice to be given to Stonebwoy for payment because he Garzy said zylofon gave the management 72000Ghs for the production of the EOM album. I made an invoice of 5000Ghs and sent it to Garzy. He later came back to tell me Stonebwoy and his management said they are not paying for the beat because it didn’t come to them from me but it came to them from DJ mingle. I have decided to speak about this whole issue because this is something which is going on in the industry for long and most producers I know are scared to speak out because of the existence of some cabals in the industry that I don’t even know of.”

“I’m not surprised he Stonebwoy is sending screenshots of me reaching out to him to his friends to post on social media as his defense. The question still remains “Did you pay vacs for producing mane me”.

Read also: Medikal’s neighbour reveals the secret in his affair with Fella Makafui and the A8 car

“Like you said in the same track you didn’t pay for its production “Ano go fit do the work without the pay”. I know this would be difficult for those who are not in the industry to understand but yet still I have to let the music lovers know what is really going on and what we are facing as producers. Our artist are quick to say support your own but always refuse to pay producers for their work. Going forward, I have learnt a lot from this little issue and I advice all producers to stand their grounds and have a signed agreement with these artist before they put out their production. The year has ended with this bad energy and I know the truth stands. I opened to working with anyone who loves good music. Lets make next year a great one. Peace ??”

Read more: Mzvee set to leave Lynx Entertainment because of Kidi and Kuami