Photo: Shatta Michy releases a ‘Swollen-faced’ photo to prove that indeed Shatta Wale has been beating her 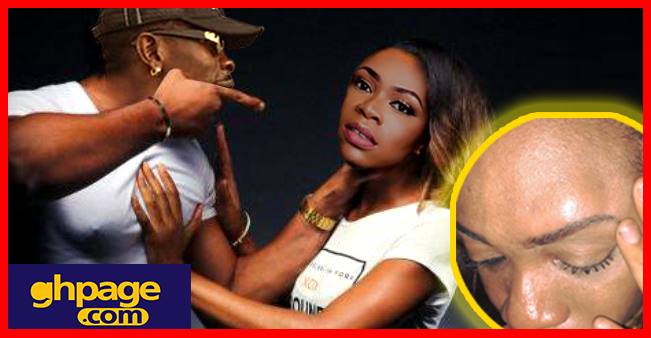 It is obvious that all is not well with the celebrity couple, Shatta Wale and Michy as both have been throwing jabs at each other.

It all started when Shatta Wale in a series of post on his Facebook timeline claimed that Shatta Michy had pulled a knife on him.

The above post was indeed subtle, as the followers couldn’t tell the woman he was referring to until Shatta Michy posted a photo of a swollen face indicating that, Shatta Wale is a hypocrite who hurts you and later come to seek internet sympathy.

With the ‘bumpy-faced’ photo attached, she wrote;

“The world is full of hypocrites. They hurt u and later come seek internet sympathy. The world knows what a good woman looks like. Unfortunately, & ungratefully, you don’t. Thanks for the bump on my head”

As if that was not enough, Shatta Wale a moment later came out with his side of the story— he indicated that he serves a living God who is not ready to let him down because he believes in him and has a bigger and better plan for his life.

“One of my biggest mistake in Life Is believing people will show me the same love I have shown them..You always cut yourself either with blade or burn urself or sometimes break bottles and glasses to still hurt yourself for the outside world to believe it cuz of the way of life I live in the industry.So people will say and I quote :Abi shatta dierrr the way Ibe basabasa he go fit do am ” my God I worship does not sleep for people like you to tarnish his image…He has never made me lost a battle..The empire is my witness on how I have kept this in me for so long..Woman kakai eeeeiii abeg come back again with better lies CUZ TODAY YOU SLAPPED ME INFRONT OF YOUR OWN MOTHER HOLDING A KNIFE TOO… What a wow !!!! Clap for yourself ..Julio bone etc are my witnesses ..Good night Ghana ??!!!”

So now, who is telling the truth? Well, bookmark Ghpage.com as any news we gather from the two will be quickly reported.