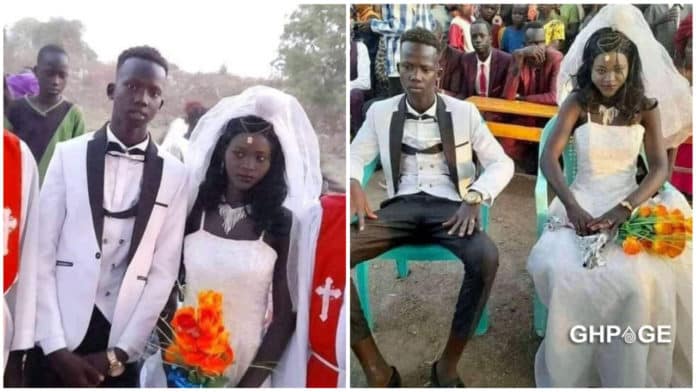 Photos from a 15-year-old boy and his classmate who is just aged 16’s wedding ceremony have gone rife on the internet and received a public uproar.

Social media users who have chanced upon these photos have severely blasted the minor’s parents as well as the pastor who ordained the unfit marriage ceremony.

The two youngsters walked down the aisle on December 18, 2021 where both parents were around to witness the whole event.

John Ndungu who first shared pictures from the wedding ceremony hurled heavy insults at the kids’ parents and the clergyman who officiated such an abomination.

I BLAME THE PARENTS AND THE RELIGIOUS LEADERS. THEY’RE SUPPOSED TO BE ROLE MODELS AND MENTORS TO YOUNG GENERATIONS. SOME PARENTS ARE SO MATERIALISTIC, I SAY THIS BECAUSE THE GIRL’S PARENTS I’M VERY SURE WERE AFTER THE DOWRY WHICH IN SUDANESE CULTURE IS HEFTY AMOUNT OF MONEY OR HERDS OF CATTLE

WHERE WILL THE TEENS START LIFE FROM? NO EDUCATION COMPLETED I’M SURE. HOW WILL THEY TAKE CARE OF THEMSELVES IN TERMS OF BASIC NECESSITIES? NO JOB, NO MONEY, EDUCATION CUT SHORT, I PITY THE GIRL #NYABUAYTHIOLBIEL, SHE WILL BE MADE A MOTHER AT VERY TENDER AGE. NO MOTHER EXPERIENCE AND ALL THAT.

THE ORGANIZING COMMITTEE FAILED THEM TOO, LOOK AT THE TROUSER BUOMKUOTH IS WEARING, IT’S SHORT , TOO SHORT ON HIS WEDDING DAY PUTTING ON A TROUSER LIKE THAT SURELY? AND THE BRIDE BLEACHED THE FACE ALONE AND FORGOT OTHER BODY PARTS.

Check out the photos and screenshots below to know more…