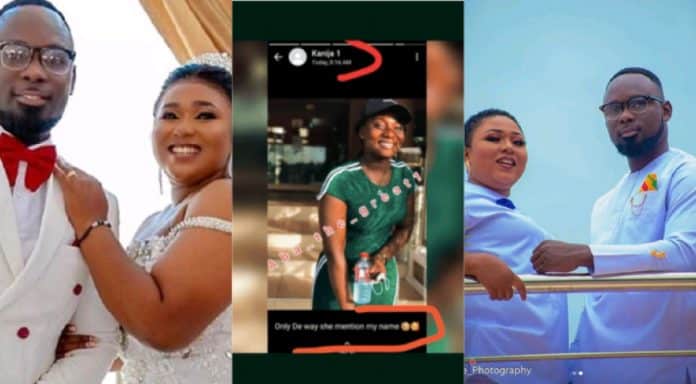 Looking at how events are unfolding, it appears that Kaninja and Xandy Kamel’s marriage has ultimately hit the rocks.

The Angel FM sports presenter has now emphatically shown that he has nothing to do with Xandy Kamel again.

The ‘ladies man” has flaunted his newly found love for the first time on his Whatsapp status.

He posted the girl’s photo on his WhatsApp status with the caption, “only the way he mentions my name“.

At the moment, not much is known about this lady as she’s not into showbiz, unlike Xandy Kamel.

In the midst of Xandy Kamel’s pain, not to mention despair, it’s heartbreaking to learn that her estranged spouse Kaninja seems unconcerned.

Netizens who are worried about Xandy Kamel’s mental health have decided to rain insults on Kaninja for behaving like a villager.

As opined by a majority of them, even if he’s having an affair outside his marriage, he should respect Xandy Kamel as his marriage with her has not yet been dissolved.

Meanwhile, Kaninja and Xandy Kamel have been given a month leave at ABN to solve their marital issues.

They will be resuming work next month as it’s believed that by then, they would have ironed out their differences for peace to eventually reign between them.