Photos of Anglican ‘kissing priest’ at St. Monica’s College of Education pop up 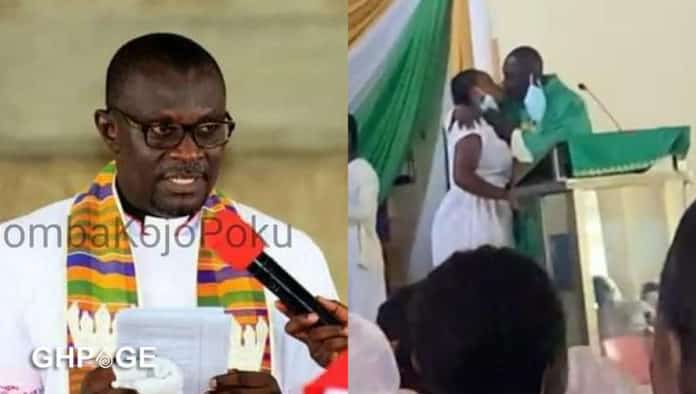 The identity of the priest caught on tape kissing some female students of the St. Monica’s College of Education of the Asante-Mampong Diocese in the Ashanti Region has finally been revealed.

The man of God named Rev. Fr Balthazar Obeng Larbi, popularly known as Father Ricky, has been identified as the Anglican priest in the viral video circulating on social media.

Fully dressed in his cassock, Rev. Fr. Larbi was seen kissing in turns some girls who were on stage with him on Sunday, August 15, 2021, during a church service.

One Facebook user who had previously been in close contact with the Reverend Father disclosed that he is a commercial Lawyer and part of the Ghana Bar Association.

He added that Rev. Fr. Larbi is also a Chaplain and a legal representative for the St. Monica’s College of Education.

“He doubled as the Chaplain and Lawyer for the Institution. Father Ricky taught me Business Law I & II at the University. He’s a good friend not forgetting how he “mafia” me in my exams score,” Adomba Kojo Poku said.

Check out up-close photos of him below.

The video, shot by a member of the audience has generated widespread condemnation on social media, although a few people have jumped to the Reverend father’s defence, describing his action as a ‘holy kiss’.

While some persons have expressed their disgust over the clip, others also questioned the morality behind the Reverend Father’s actions calling on the church and the Ghana Education Service to take action against him.

The Anglican Church of Ghana in a statement on Tuesday, August 17, said it has begun investigations into a circulating video of the Priest ‘force-kissing’ the young girls.