Photos: Story of Samini-(Before the fame) 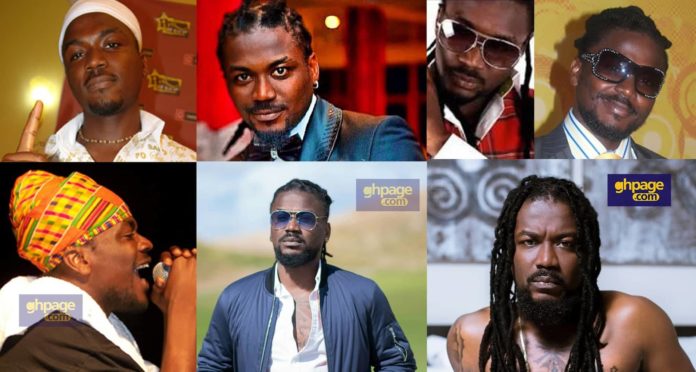 Samini, formerly known as Batman Samini is a Ghanaian Reggae and Dancehall artiste from Wa, Ghana and terms his brand as the “African Dancehall”.

Samini, Originally known as Emmanuel Andrews Samini was born on 22nd December 1981. He started singing in a church in a church choir at age 14 and became a professional musician after a musical collaboration with another musician in 1999.

He was born to Mr G.A. Samini and Theresa Nusala and lived in Dansoman since he was 9 years. On 22nd December 2006, Batman officially changed his name to Samini and since then he can be regarded as one of the prominent and successful musicians in Ghana.

ALSO READ: Samini begs to be given license to grow weed

He had his primary education at Holy Family Basic School and later went to St. Margaret Mary’s Secondary School for his secondary education.

Samini released his studio debut album, Dankwasere in 2004 which topped music charts for weeks and won two awards at the Ghana Music Awards.

His album was supported by the single “Linda” was an instant hit and was the favourite song of many Ghanaians.

He signed his first record deal with Ashanti International where he worked with Nana King and Kwame G.

In 2006, he followed suit with his sophomore album which had his hit song “Odo”. He is currently the CEO of the High Grade Family.

Samini is a legend when it comes to music and he has many awards to his credit and below are few:

Currently, Samini is not married but can be regarded as the father of all nations. He has six children with different women, namely Ayana Samini, Toyila Samini, Yelisung Samini, Kelile Samini, Emmanuel Andrew Tafari Samini Jn and Haile Micaiah Yidaana Gansonye Samini.

It was reported that the award-winning musician has an amorous affair with the Member of Parliament for Dome Kwabenya and the Deputy Majority Leader, Adwoa Safo but had no children.

Currently, Samini is the Chief Executive Officer of High Grade family, a record label that has nurtured top artists like Kofi Kinata, Kaakie and Stonebwoy.

Samini is best known for his electrifying stage performance and his captivating live band experience that Ghanaians love.

He has worked with a lot of artists in Ghana and in other countries. He has received international recognition and toured the UK, Germany, Italy, Canada and the Netherlands.

Samini has released six studio albums, with all being successful on the commercial market, both at home and abroad.

ALSO READ: I’m so desperate to sleep with my rich uncle-girl opens up

A man born and raised, for the most part, in Ghana who travelled to the US to study and ended up in...
Read more
Lifestyle

Several things have happened over the years that have got people accepting the fact that indeed the world is a strange place...
Read more
Lifestyle

Armed robber turned pastor, Ogya Nyame talks about past life and how God called him

The life story of the founder and leader of Shinning Grace Chapel International, Bishop Isaac Appiah popularly known by many as 'Ogya...
Read more
Lifestyle

A UK born lady with her deportee boyfriend who has Ghanaian roots explained in an interview how their lives have taken a...
Read more
Lifestyle

Ex-Black Stars captain Asamoah has shared lovely pictures of her gorgeous daughter on her birthday and gets social media talking about how...
Read more
Lifestyle

A UK born lady with her deportee boyfriend who has Ghanaian roots explained in an interview how their lives have taken a...
Read more
News

The mother of the final year KNUST SHS student identified as Richard Sam who died some days ago has finally broken her...
Read more