Photos of Woman assaulted at the Midland Savings 7 Loans 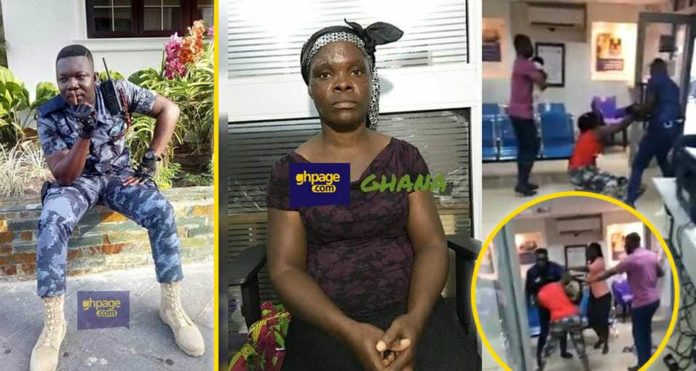 Today, 20th June 2018 will go down as one of the days Ghanaians experience one of the worse police brutality in the history of the country. A woman and her infant baby were brutalized by a police officer who was supposed to protect her right inside the banking halls of Midland Savings and Loans.

The police officer identified as Frederick Amanor aka Skalla assaulted a woman who had come there to withdraw her own money deposited at the bank.

According to the reports, the woman went there to withdraw an amount of GHS250 but she was told the bank has closed so she should go and come back the following day. She was adamant and the bank called in the police on guard, Frederick Amanor to throw her out.

It’s still unclear what the woman said that infuriated Frederick Amanor but all we could see is the police officer slapping, punching her face and dragging the woman on the floor right inside the banking halls.

The woman could be seen crying and clinging to her baby but constable Fredrick Amanor cared not and kept punching her.

Well, the police administration has revealed Frederick Amanor has been arrested and the police have already started investigations.

Midland Savings and Loans has also come out to apologize to the woman and has even promised to compensate her.

SEE ALSO: Photos of the police officer who assaulted woman at Midland Savings and Loans

In fact, this has even sparked an outcry on social media with many calling for the head of the woman beater police officer.

Ghpage.com has just chanced upon the photo of the woman who was abused mercilessly together with her daughter.

CHECK OUT HER PHOTO BELOW

SEE ALSO:2nd Video: What happened at Midland Savings & Loans after the police officer beat up the nursing mother

Share
Facebook
Twitter
WhatsApp
Previous articlePatience, the woman who was assaulted by the Police Officer speaks
Next articleMinister of Gender demands immediate sack of policeman who beat up the nursing mother