Police beating driver and mate who assaulted policeman in custody-lawyer 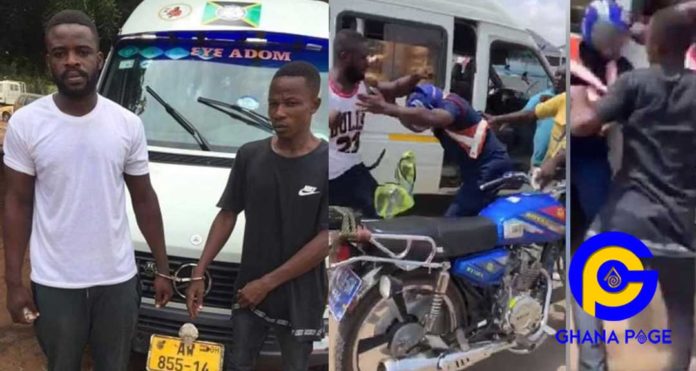 Francis Buabeng and Albert Ansah, the driver and his mate who were captured in the viral video punching a police officer over the weekend have been subjected to severe beatings at the Odokor Police Sation where they were being kept according to their lawyer, Francis Xavier Sosu.

In an interview with Accra-based Joy FM, the renowned human rights lawyer, Francis Xavier Sosu stated that the physical appearance and the demeanor of his two clients is a clear indication that they have been subjected to severe assault by the police.

SEE ALSO: Trotro drivers and mates beat up policeman at a bus station

As a result of the bad treatment, the two accused have been transferred to the Bureau of National Investigations (BNI) custody.

SEE ALSO: Photo of the driver and mate who assaulted a policeman

“From our conversation, the BNI has provided them with a safe haven. They are receiving better treatment,” Francis Xavier Sosu stated.

Francis Xavier Sosu who spoke with the media after meeting with his clients declared that the driver and his mates are rather the victims, not the abuser from what they have informed him.

Francis Buabeng (Driver) and Albert Ansah (Mate) have been charged with conspiracy to commit a crime and causing unlawful damage. They have pleaded not guilty and will reappear before the court on 1st April 2019.