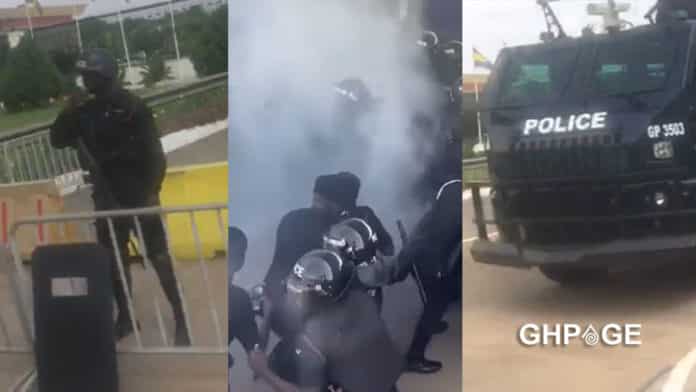 Security at the seat of the President has been intensified on day two of the Arise Ghana demo that will see protesters marching from the El-Wak Sports Stadium through the Liberation Road to Parliament House.

The protest, which started earlier in the day on Tuesday, June 28, 2022, turned chaotic after disagreements between organizers of the demonstration and the police over routes the group will take from their converging point at the Obra Spot at the Kwame Nkrumah Circle.

Arise Ghana had earlier planned to picket at the precincts of Jubilee House, but the move was opposed by the Police as they subsequently filed an injunction praying the court to direct the organizers to commence the protest at Obra Spot and end at Independence Square.

The group has said it will go ahead with the second day of its protest, despite yesterday’s development.

At least 12 police officers have sustained various injuries while some police vehicles have been destroyed after demonstrators pelted them with stones.

In a statement, the Ghana Police Service described the attacks on the officers as shameful.

Police have arrested 29 protestors who engaged in violence during the Arise Ghana demonstration on Tuesday, June 28, 2022.