Takoradi: Police officer shoots himself to death over theft 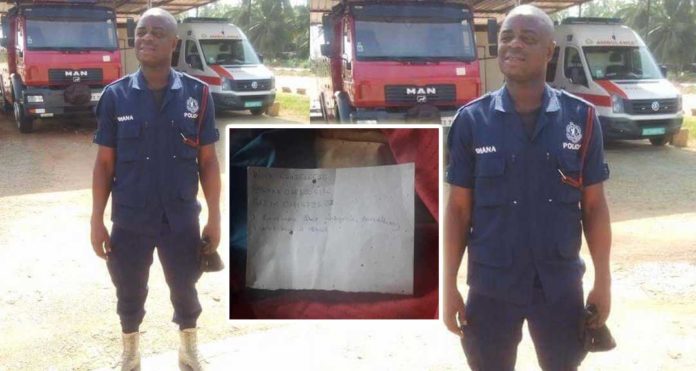 The suicide comes after the Western Regional Police Command interdicted four police officers for allegedly stealing electrical gadgets from the Osagyefo Barge, which they have been mandated to protect.

Fuseini Mohammed of Marin Police, Anyinase who was on duty at Osagyefo Barge, Effasu near Half Assini shot himself dead with AK 47 assault rifle after he sent L/CPL Iddrisu Kafando Muntari, whom he was on duty with, to buy him a shaving blade.”

Sergeant Fuseini Mahamuda left a suicide note which contained his wife’s phone number and a short messaged which pleaded his innocence.

The message reads: ”I can’t take the disgrace, Something I don’t know about”

Speaking to Adom FM’s Dwaso Nsem, Monday, the Western Regional Police Public Relations Officer (PRO), Olivia Adeku confirmed the news and revealed L/CPL Muntari returned to find the lifeless body of Mohammed lying in a pool of blood with the AK 47 rifle lying next to him in the room.

However, Madam Adeku said they were very shocked at the development since the deceased was not linked to the crime committed at the Barge.

A social media user has shared a sad story of how a female worker was sent home by her bosses for coming...
Read more