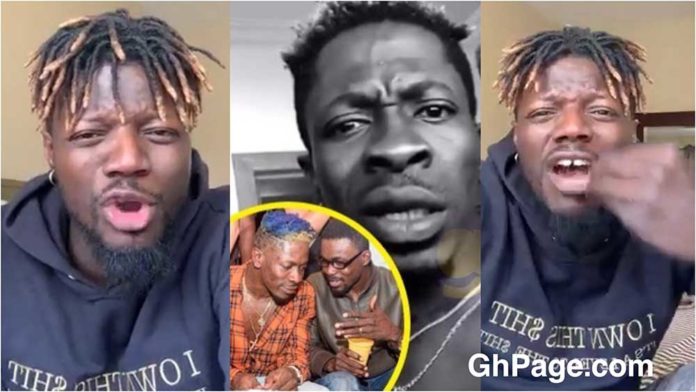 The CEO of Asuoden Music, Pope Skinny has taken a swipe at Shatta Wale and other artists for showing fake love to the embattled CEO of Menzgold Nana Appiah Mensah (NAM1) after his release from jail.

According to the ‘Hot cake’ hitmaker, artists signed to Zylofon Music and other people NAM1 helped never defended him when he went away and are now showing fake love after his release.

“Most Ghanaians are fake. After NAM1 was released people are now using his picture as profile pictures.

One thing I have to tell Nana Appiah Mensah is that; as you were arrested it was only one person who had your back and was always defending you. His name is KOD in London.

Everybody now hailing you is fake, from the artists to the ministers, to your friends and anyone you once offered help to are just showing fake love. They don’t love you”, Pope Skinny stated.

Pope Skinny also advised Nana Appiah Mensah to make every effort to settle all Menzgold customers especially the poor ones.

He also cautioned NAM1 to be careful with whom he associates himself with if he arrives especially as we get closer to the election year.