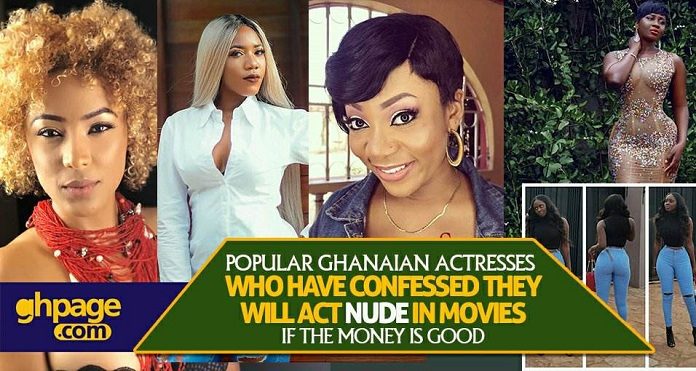 Just last week, Ghanaian actress, Christabel Ekeh did the most bizarre thing a celebrity can ever do. The beautiful actress shared 5 nu-de photos of herself on Instagram all in in different poses.

Some people have attributed her action to a psychological breakdown. But her family insist she has no mental problems and they have even attempted to justify her action.

Ghanaians woke up just yesterday to be greeted with the nu-de modeling video of social media celebrity, Rashida Black Beauty. She claims she recorded it for her boyfriend and it got leaked. Considering the fact that she is 17 years old makes it a heartbreaking excuse.

This action prompted Ghpage.com to do a research on Ghanaian actresses who are willing to act in fully nakked movies if the money is just right.

SEE ALSO: “Only Ghanaians who are fools will condemn my Nu-De Video” – Rashida Black Beauty (Video)

Well, there are instances where actresses in Ghana act semi nu-de scenes in movies like Nikki Samonas’ movie with Jim Iyke titled ” My First Wife”. But we are talking about very popular Ghanaian actresses who have confessed they will act complete nu-de if the money is right and the movie is good. Here We Go.

Our very own amnesia patient, Vicky Zugah has at one point declared she will act nakked any day, anytime if the money is good. But knowing her and how she quickly forget what she says immediately after she has said it, she told City People Entertainment Magazine she didn’t say exactly that. This is what Vicky told City People:

“Point of correction: I didn’t say I can act nu-de if the fee is tempting, what I said was that I wouldn’t mind acting nu-de because when I choose to act, I will do anything to tell a good story.And yes, I still have the confidence to act nu-de if it becomes necessary”.

SCROLL DOWN AND CLICK ON NEXT PAGE TO SEE MORE ACTRESSES