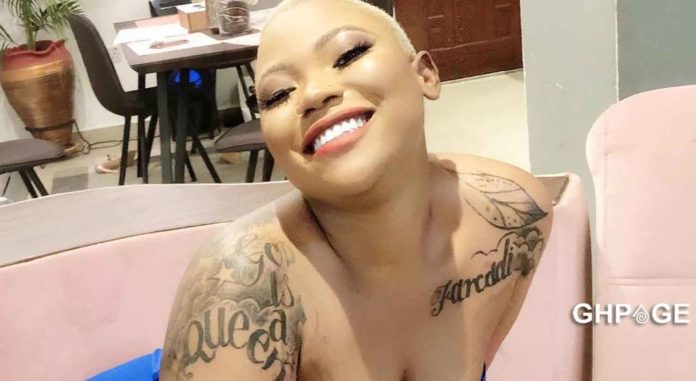 A video posted by Farcadi shows her advertising her new hookup business and looking to recruit young ladies to pimp out for money.

It is public knowledge that there are people that run brothels, set up hookups, and others that are into prostitution but for her to have taken it public, knowing that it is illegal is another thing.

On the show was a gentleman named Wilson who claimed to have once dated a prostitute who sponsored him through Senior High School.

He explained that the said lady would ply her trade all day and afterward he would also have his turn and spend the night in her room.

The conversation took a different turn as co-host, Rita, brought up that Farcadi had started pimping girls for money based on a video the slay queen posted.

From Farcadi’s video, she stated that she was charging 500 cedis for a 6-month subscription for anyone who wanted to sign up for the business.

The famous slay queen offered to hook these girls up to clients who would pay them well and then she would in turn earn her commission.

The panel was surprised that the authorities have not taken her on and bashed Farcadi for leading young girls astray.

Queen Farcadi is referred to as a Snapchat hooker who claims to charge not less that 30,000 cedis for a night with her.

She has stated categorically in the past that every woman who hooks up with a man that is not her husband is also into prostitution as much as herself.