Her hard African face to her level of maturity; Medikal lists 5 powerful things he loves about Fella Makafui you can't find in Sister Derby 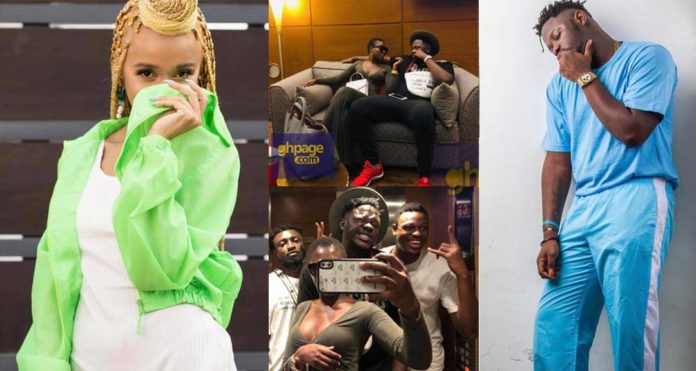 Samuel Frimpong popularly known in showbiz by the name Medikal has thrown more light on his affair with the YOLO actress, Fella Makafui. The AMG rapper has listed the 5 powerful things that he saw in Fella Makafui leading to their affair.

In a post on his Instagram page, Medikal who just dumped Sister Derby for Fella Makafui explained that the first thing captivated him about Fella Makafui over the 5 years they stayed as friends was her hard-working attitude. He claims Fella is a very hard working young lady. Meaning Derby is not…lol

SEE ALSO: MediFella Love: Medikal explains why he fell in love with Fella Makafui after 5yrs of friendship

Again, Medikal explained that Fella Makafui is a strong, respectful and powerful black woman. It was something he found irresistible in Fella Makafui.

Medikal didn’t end there. He explained further that he loves Fella Makafui’s hard African face and her dark skin. We all know Sister Derby is very fair. She is actually a half cast; She is the younger sister of Wanluv Kubolor.

According to Medikal again, Fella Makafui’s impeccable beauty, as well as her level of maturity, is something he can’t just resist.

5 years ago we became friends. you’ve always been hard working and a very strong respectful powerful black woman. You teach me a lot of things day in and day out.People criticize me as if they’ve never had ex’s and aren’t into new relationships but anyway I guess that’s how it goes.Its also rather unfortunate that Some people don’t understand us and say or act towards however they feel and sad how they don’t know what led to my current breakup with my ex.I never expected to be foes with my ex after our breakup, wanted us to still stay cool as good friends because who knows what might happen next in this life ? but unfortunately she is out there mocking me and you with songs and videos etc.I want the world to know I’m glad I found you and finally fell in love with you after several years of friendship.Im in love with your hard African face and your dark skin as they say.Your beauty is impeccable and your level of maturity can’t be taken away from you! ??