Ghanaian based Gambian slay queen and actress Princess Shyngle we are sure has finally gotten what she wanted after we reported earlier that the wife of Ghanaian midfielder Micheal Essien, Akosua Puni had packed out of their matrimonial home.

Princess Shyngle some months ago confirmed that she was dating big men including some who were already married in an interview which made her mention Micheal Essien as one of the men she had dated.

According to her, she dated Essien for a long time before getting to know he was married to Akosua Puni because he(Essien) kept it a secret and never spoke about it.

Akosua Puni after hearing this coming from the slay queen and other some other allegations she has heard about Essien cheating made her pack out of her matrimonial home.

But instead of Princess Shyngle regretting her actions for breaking up their union, she rather took to social to mock Akosua Puni and even calling her the “dumbest wife” for leaving her husband(Essien).

“If you leave your husband’s house because he’s still in love with his ex and can’t let her go then you should definitely receive the dumbest wife of the year award”. 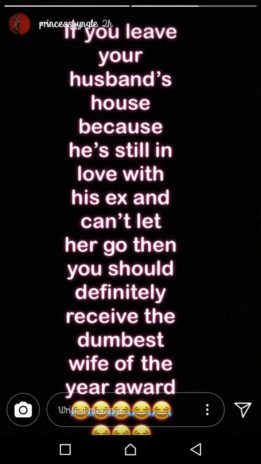