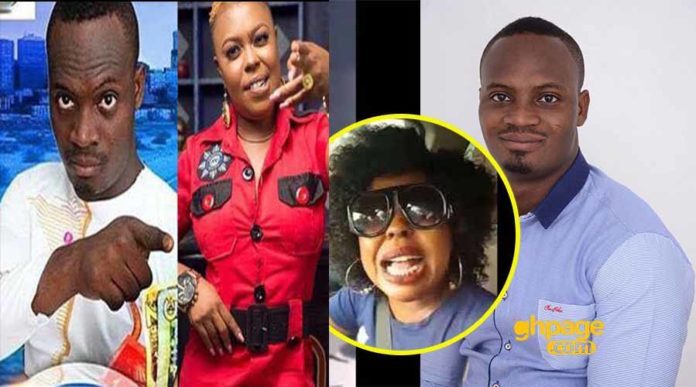 Ghpage.com has sighted a video of Prophet Adom, in which he reacts to Afia Schwarzenegger‘s insults and curses after his doom prophecy on her.

Kumasi based Prophet Stephen Kwadwo Adom, leader of Zion Miracle Worship Center (ZMWC) over the week claimed God has revealed to him that Afia Schwarzenegger will be paralyzed and die in Kumasi very soon if she does not do away with the charms.

READ ALSO: Angry Afia Schwarzenegger threatens to burn church of the pastor who prophesied her death

Reacting in a video over Prophet Adom’s prophecy, Afia Schwarzenegger lambasted him as she was heard saying, the mother and the wife of the prophet are all prostitutes. She also stressed that she will burn down the church of the prophet if she had known the location.

However, her comments have sparked the man of God in which he has also reacted over her insults and curses on him.

According to the man of God, he is not the type of prophets who prophecies about what God has revealed to him in other to gain popularity. He also added that if someone prophecies about you and you think it’s not true, you only needed to pray over it and not to insult him.

READ ALSO: Kwadwo replies Ohemaa Glory after sharing a screenshot of their chat to disgrace him

“It is only between you, me and God who knows what am talking about; the year 2000 3rd, March you slept at the seashore naked in return for charms” Prophet Adom revealed.

“7 years later, in 2007 3rd, August Sister Afia, who is not having a child, beautiful lady who the whole world kneel before you again went to sleep at the seashore, what were you doing there that day?” he quizzed.

He continued, “2014 March, 7th you again went to sleep at the seashore, what were you doing there again? If I tell you are depending on some spirit, you then tell me my mother is a prostitute, Afia you and I are staying in Ghana here we know what is going on ooooh I know ooo”

Watch the video Below;