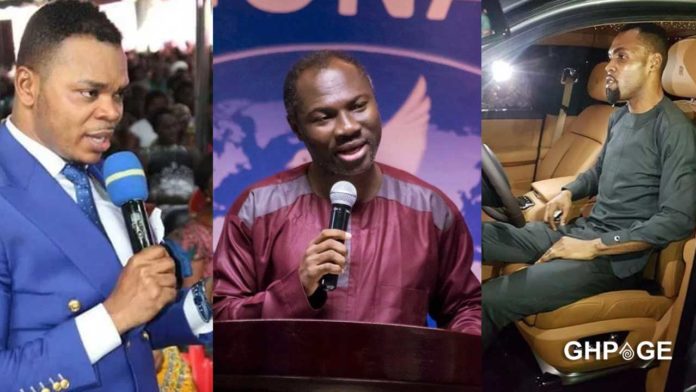 In a video sighted by Ghpage.com, Prophet Badu Kobi stated that the God they all serve stands for peace and unity, therefore, these men of God must represent that.

He stated that he has been really disturbed about the battle between these two great men of God and has decided to voice out his sentiments.

Prophet Badu Kobi advised Rev Obofour and Angel Obinim to find a way to resolve the issues in their camp.

According to Prophet Badu Kobi, he is not siding with anyone and that their fight is disrupting the work of God.

Badu Kobi further stated that he cannot fathom why men of God who are supposed to fight against the devil are rather fighting against themselves.

He also advised the people from both camps to refrain from insulting and exposing secrets about each other.

There is currently an ongoing feud between the founder of Anointed Palace Chapel, Rev Obofour and the leader of International God’s Way Church Angel Bishop Daniel Obinim.

This scuffle started after a junior pastor from Rev Obofour left to join Angel Obinim’s ministry.

Since then, the two popular and controversial men of God have been throwing jabs at each other and also revealing some secrets.