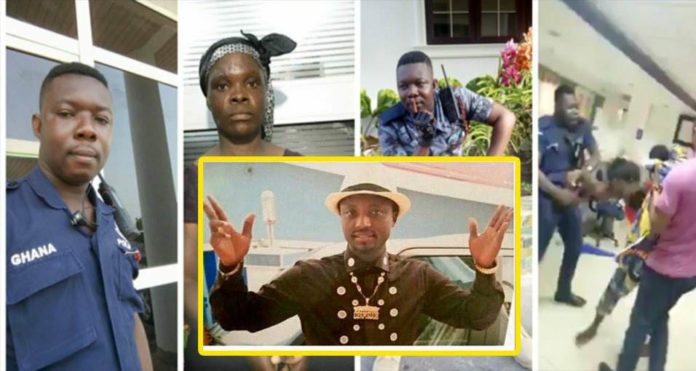 In the wake of Midland assault saga, many have condemned the action of the Police officer and has even received life-threatening words.

A lot of citizens including President Nana Addo Dankwa Akufo-Addo has lauded attempts to bring the officer to book.

read also: DON LITTLE CRIES AS HE BEGS FUNNY FACE TO FORGIVE HIM

In the video which went viral on social media, the policeman is seen using an umbrella to hit the woman, who is carrying a baby, and then he hits her with his hand and drags her on the floor all the while she wails and cries.

There’s barely any that has jumped to his defence after the video went viral but founder and leader of Ebenezer Miracle Worship Center in Kumasi, Ghana, Ebenezer Adarkwah Yiadom has jumped to the defence of Lance Corporal Amanor stating that he should be spared for his indecent against Patience Sarfo.

read also: This is what Shatta Wale’s daddy did to him when he stole his car

According to Ebenezer, the woman at the centre of this brouhaha has received donations, house and money and therefore she can now provide for his family so there’s no need for the officer to be detained anymore.

Lance Corporal Frederick Amanor was arraigned before an Accra Circuit Court Thursday morning, a week after the alleged assault incident. In his caution statement, Frederick Amanor admitted to the offence. Judge Janet Harriet Akweley Quaye, remanded him into police custody and the case has been adjourned to August 9, 2018.