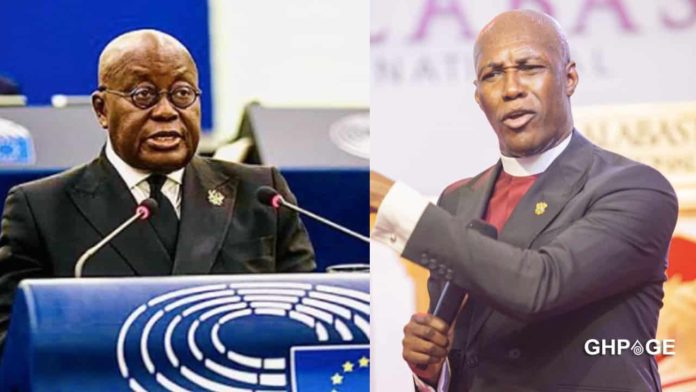 One of the fierce men of God we have in the country at the moment who possibly has no favourite politician and always states facts, Prophet Kofi Oduro has expressed his complete disappointment in Nana Addo and also entreated him to resign.

As suggested by the highly opinionated cleric, Nana Addo must resign ASAP because he has failed to live up to his promises and expectations of the populace who voted him into power.

READ ALSO: “I support the building of the National Cathedral but…” – Prophet Kofi Oduro

Speaking to his congregation last Sunday (18th September 2022) – The founder and leader of Alabaster International Ministry Prophet Kofi Oduro fired Nana Addo for mismanaging the economy of the country.

As submitted by Prophet Kofi Oduro, Ghanaians should withdraw their belief in Akufo Addo that he’ll restore the economy back to life because he can never do that.

After slandering, Nana Addo, he also claimed that if he was the one in the charge of the office of the presidency at the moment, he would have resigned because he’s a man of principles.

Kofi Oduro is reported to have said;

READ ALSO: Prophet Kofi Oduro boldly exposes the wives of popular pastors who have been sleeping with trotro drivers (Video)

“If I were president Nana Addo Dankwa Akufo Addo, I would have resigned and gone home safely,”

Reactions from many Ghanaians following Prophet Kofi Oduro’s advice to Nana Addo to resign clearly show that they are gutted by Nana Addo’s incompetence.