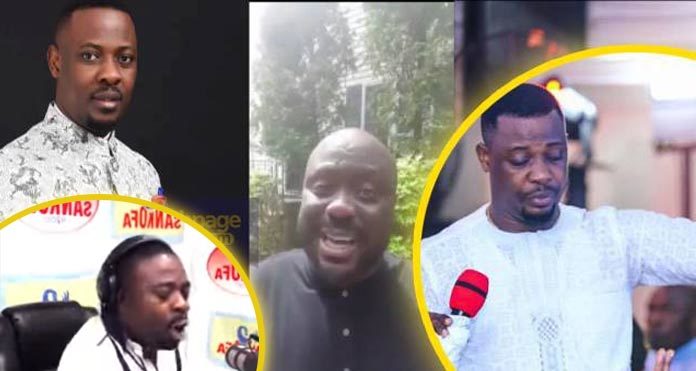 Prophet Nigel Gaisie is the founder and leader of True Word Fire Prophetic Ministry (TWFPM), and he became popular in Ghana after predicting the death of the late popular musician, Ebony Reigns.

The man of God has been alleged to have wanted to sleep with late dancehall diva Ebony Reigns. According to DJ Oxygen, he only wanted to do something with the late musician but did not get the chance. DJ Oxy described his Ebony’s prophecy as fake.

According to DJ Oxygen, he knows a lot of secrets about Nigel which is yet to come out.

“I did not want to expose you because you begged me. You pleaded that you are an Akuapem, so I should not expose you. But if you don’t know and you go on radio to speak ill of me, I will expose you.” He said.

I have concrete evidence that proves he’s a fake prophet. There was once a woman who alleged on one of Despite’s radio station that Prophet Nigel Gaisie has had a s3xual affair with her.

He even offered me a bribe of GHc 1000 just to keep mute of his secrets. In DJ Oxygen’s assertion, he claimed that very soon women will flood his church to disgrace him of his infidelity.

He slept with a woman he collected GHc250 million from to cure his husband of stroke. He also slept with his church administrator’s wife whom they stayed in one building.

He also sounded a note of caution to the prophet not to talk about Rev Owusu Bempah—Which he added that Owusu Bempah qualifies to be his first son if he had given birth earlier.

The radio owner who claimed to be speaking from New York dared the prophet to open his mouth — Which will force him to cut short his stay in abroad to come and expose him more.

READ ALSO: Hot Audio: Prophet Nigel Punches Owusu Bempah In A New Interview & We Now Know The Beef Is On