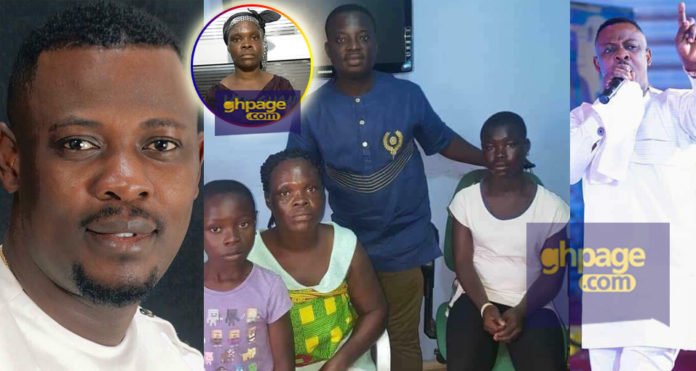 The founder and leader of Word Fire Prophetic Ministry (TWPFM) Prophet Nigel Gaisie has promised to pay the tuition fees for the children of Madam Patience Safo, the woman who was beaten by a police officer at the Midland Savings and Loans in Accra on Thursday, 19th July 2018.

A video of a police officer, later identified as Lance Corporal Frederick Amanor, assaulting a woman holding a less than 3 months old baby inside a banking hall (Midland Savings and loans, Shiashi branch) went viral on social media on Friday, a day after the assault.

SEE ALSO: Patience, the woman who was assaulted by the Police Officer speaks

The police officer could be seen punching, kicking, and dragging the woman on the floor in an attempt to throw her out of the banking hall.

The woman could be seen desperately clinging to her baby. But the police officer paid no heed and kept hitting her.

According to the woman, she went there to retrieve the money she had deposited there, an amount of GHS270.

But she was denied and told yet again after a week to go and come the following day. What happened was when she refused and demanded her money.

The video sparked an uproar from Ghanaians. The police officer has since been arrested and donations have been pouring in from all sectors of the Ghanian community to help the woman.

Ghpage.com gathers the woman has received over GHS400,000 so far in donations. She has also been given an apartment by the Despite Group.

And now, Prophet Nigel Gaisie has revealed he will sponsor the education of the children of the woman to the University level.

Prophet Nigel Gaisie took to his Facebook page to reveal his intentions and to give out a number any relative can call for him to gain access to the woman and her children.

He posted on his Facebook page; “For God and country….Please help me connect this lady who was assaulted, I long to sponsor her kid’s school fees from where ever they are to university….Contact line….0244737836!!!The Jesus Agenda.”