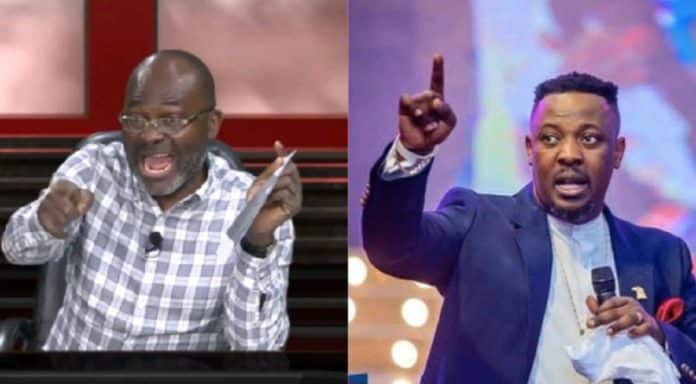 The fresh update followed after news went viral on the local digital space that the Assin Central MP has been bedridden by stroke and currently receiving treatment in the US.

Prophet Nigel Gaisie who is convincingly happy about Kennedy Agyapong’s predicament has dropped a message on his Facebook page in connection with the yet to be confirmed stroke saga.

According to Nigel Gaisie, Kennedy Agyapong’s sickness will serve as a great lesson to unbelievers who try to ridicule the men of God in the country.

He went on to project that, impending doom is yet to befall on all his critics by the end of the year.

Nigel Gaisie who has been tagged as an NDC pastor also bragged that he has been specially anointed by God hence no one can toy with him and go scot-free.

He ended his post by charging on Kennedy Agyapong’s family to expect more pain because the legislator tortured his family when they were beefing with his false comments about him.

Take a look at the screenshot below to know more…

About two weeks ago, IG blogger, @AbaTheGreat asserted on his page that Kennedy Agyaong is down with stroke reason he has been absent in the media space for some time now.

Many celebrities including Afia Schwar, Nana Ama Mcbrown, and several others dropped a word of prayer for the MP on their social media pages.

After the rumors gained ground on the web, pictures of Kennedy Agypong looking very healthy have also landed on the internet making it difficult to confirm the authenticity of his stroke story.