Prophet revealed the actual cause of Ebony’s death 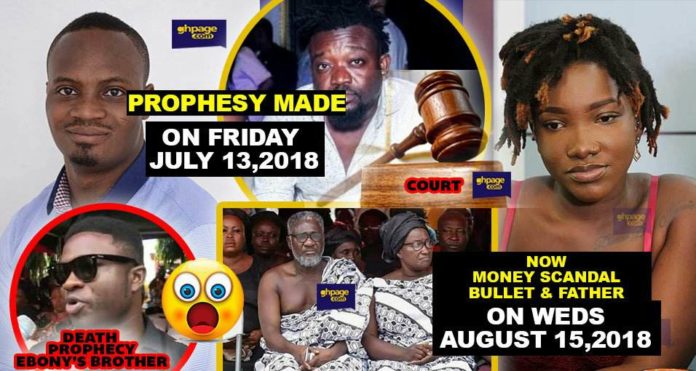 In recent days, Nana Opoku Kwarteng and Bullet, who’s currently out of the country has been making allegations against each other concerning Ebony’s tribute concert which was held on the eve of her funeral.

Ebony Reigns’ father, Nana Opoku Kwarteng accused Bullet of cheating by allegedly offering him a peanut of GHC2,000 out of the whopping GHC39,999 profit made at the music concert organized in honour of her late daughter.

The late artist’s manager, who was offended by Mr. Kwarteng’s claims launched a scathing attack on him, describing him as a greedy man whose actions are capable of ruining his [Bullet’s] business.

According to the Prophet, when Ebony started her musical career her father who is a member of a secret society took her name to one of their meetings to make her daughter blow that was before she met her former manager Bullet who also belonged to a different secret society.

He went on to reveal that the society that Bullet belongs too is stronger than that of Ebony’s dad so he promised of helping her. After signing of the contract, Nana Opoku Kwarteng being Ebony’s dad realized that Bullet was getting the greater share of all monies made from Ebony whiles she was given little. So he decided to take Ebony from Bullet by reporting to his group.

Bullet, on the other hand, refused to let go of Ebony after her father had brought the idea of taking Ebony away from him this resulted in a spiritual battle between the two. On the day of the accident, both spirits clashed and it resulted in the death of the superstar.

SEE MORE: Zylofon’s PRO, Arnold blasts Bullet for claiming to have made Ebony