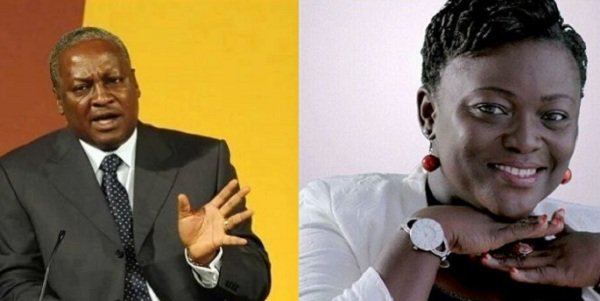 Multimedia journalist, Nana Yaa Brefo Danso, has debunked claims that she has ever dated Former President Mahama and said that she sees the former president as a father.

According to the TV newscaster, dating former president Mahama is John Dramani Mahama would have been a privilege.

Nana Yaa said any woman will love to have the chance to the date the former president. “Who wouldn’t want to date a president?” She quizzed.

READ ALSO: ‘May God Kill Me If I Ever Steal From The State’- Thomas Kusi Boafo

The Multimedia journalist, however, categorically dismissed the rumors to the effect that she used to date former president Mahama once upon a time are false.

She added that former president is like a father to her and he (John Mahama) use to call her my daughter.

“…In fact, he is my father, he calls me his daughter. I’m actually closer to the wife, Lordina than himself,” she said.

ALSO, READ: Lady Shares Chat With A Guy Who Asked For “$3x” In Exchange For A Job(Screenshot)