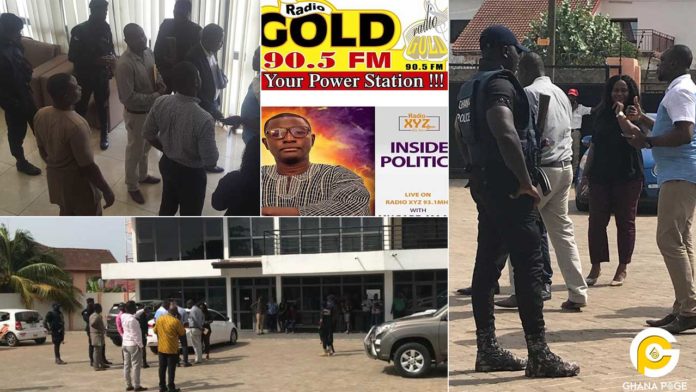 The two radios stations affiliated with the opposition National Democratic Congress, Accra based Radio Gold and Radio XYZ have been shut down by operatives from National Communication Authority during NDC’s live press conference, Ghpage.com can confirm.

The two radio stations were broadcasting the Press Conference from the headquarters of the NDC which was being addressed by the Council of Elders of the party when they went off air.

According to the National Communication Authority, these two stations affiliated with the opposition party have not renewed their operating license.

The Press Conference was held to address what they have described as intimidation from the ruling NPP against some party leaders especially against the National Chairman, Ofosu Ampofo.

After being arrested and charged with conspiracy to commit a crime against government official which he is on bail following the leaked tape which he has denied it is him, the Police again invited Ofosu Ampofo for questioning yesterday, 8th May 2019.

This time, the police CID revealed people arrested in connection with recent market fire outbreaks and kidnapping has named him as the architect of a grand scheme to cause fear and panic in the country.

SEE ALSO: Here are the top 6 musicians in Ghana according to Minister of Communication, Ursula Owusu

Ghpage.com is following the breaking news and will update you when something new comes up. Stay with us.

Popular Ghanaian socialite, Hajia4Real has through her lawyers ordered the Ashanti Regional NPP Chairman, Chairman Wontumi to apologize to her within 24...
Read more
News

Sir John dies along with sister and mother from coronavirus

According to recent reports, Mr. Kwadwo Owusu Afriyie famously known as Sir John died along with his mother and sister, who all...
Read more
News

A young man alleged to have been a member of a group who packed bundles of cash alleged to be belonging to...
Read more
News

The death of Lawyer Kwadwo Owusu-Afriyie popularly as known Sir John, former NPP General Secretary has come as a shocker to all...
Read more
News

The Vice President of Ghana, Dr. Mahamudu Bawumia has taken to his social media platforms to mourn the death of Sir John,...
Read more

Some ladies will do anything to survive including doing ridiculous and absolutely shameless things to just because of peer pressure.
Read more
Entertainment