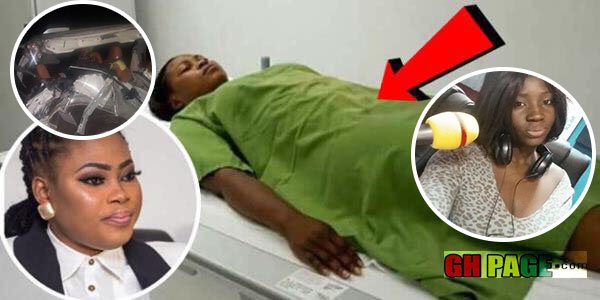 A radio presenter named Afya Boadiwaa Fabregaz has broken down the actual happenings and the truth behind gospel musician, Joyce Blessing’s accident.

Joyce Blessing was scheduled to perform at the Bliss on the Hills’ Concert and as such was on her way to Kwahu in the Eastern region when the said accident occurred around 11:15 pm.

This, however, has been disputed by Fabregaz.Speaking further on the matter on rainbow radio she indicated that, details of her so-called unfortunate accident have been exaggerated.

According to her, the information she gleaned on the day of the accident did not have Joyce Blessing involved in the unfortunate incident but rather her crew.

“I was holding the list of musicians to perform and called Joyce Blessing but she was not picking up.I was in the car, then Regina Tetteh (Works at Media Excel) came to inform me that, the crew travelling with Joyce Blessing has been involved in an accident.”

“I still kept calling Joyce Blessing and her husband, Dave Joy picked up the call.He told me that, the crew they were travelling with has been involved in an accident so had to return to take care of them.”

Fabregaz instructed the host to read a Facebook post made by Regina Tetteh on the day of the accident to confirm her statement that, Joyce was not in anyway involved in the accident.

READ ALSO: Photos: Joyce Blessing Got In A Critical Condition After The Accident On Christmas Day But Now Responding To Treatment And Still Need Your Prayers

The Facebook update made by Regina and as read by the host stated;

“I remember vividly calling Joyce Blessing’s P.A to confirm if they are coming.She replied that they are on their way.I even gave them the location of the hotel they are relaxing before the show.This happened in the afternoon.

“Now in the evening, when the show has started, I asked about their whereabouts, she said they are coming and I asked them to come to the event grounds.Around 11 pm to 12 midnight, they were still not in because it was her turn to perform after Francis Amo.

“I again called the said P.A Lawrencia, she said they are coming, later she called to tell me that they have had an accident.I told her the place was noisy so I will call her back.

Fabregaz added, it was this truth she has vowed to speak that Joyce Blessing and his people have to fabricate that she has slept with Kwasi Ernest, the CEO Of Media Excell and the organizers of the said gospel event.

Watch her narration below;

Also, see The ‘Hidden’ Daughters Of Some Of Ghana’s Political ‘Giants'(Photos)