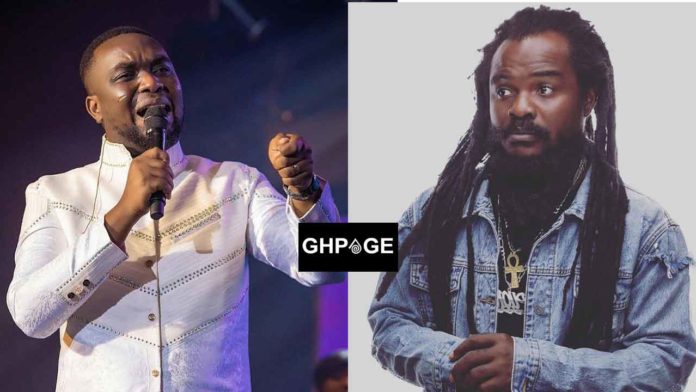 Just about a week ago, Ghanaian gospel artist, Joe Mettle revealed in the course of an interview that he never knew Ras Kuuku until 2020.

According to him, he only got an idea of whom Ras Kuuku was after news broke about his missing Vodafone Ghana Music Awards plaque in 2020.

In a conversation with Andy Dosty, Joe Mettle who won the VGMA Artist of the year award in 2017, stated that he never knew Ras Kuuku and wouldn’t have known him if his plaque had not reportedly gone missing.

“I didn’t know Ras Kuuku until his award got missing.”

Ras Kuuku’s plaque going missing was big news considering the fact that it was the first time such news was being reported.

Subsequently, it was found.

Since then, Ras Kuuku and Joe Mettle have been having a back and forth. When Joe Mettle was nominated for the Reggae-Dancehall category for the previous VGMAs, Ras Kuuku went mad.

He stated that the gospel artist did not qualify to be in such a category. In response, Joe Mettle had said that Ras Kuuku would get over it after a while.

“if he were also nominated, they would do the same to him, so it’s a regular thing, and I wouldn’t expect less.

“The point is, no matter who appears in the category, there have been years where people are said not to deserve to be in a particular category; every year, it does come up, so I don’t feel like this is new in terms of how some people feel.”

Amidst the brewing controversy and beef, Ras Kuuku has taken a deep swipe at Joe Mettle once again and according to him, the gospel star wants to use him to trend.

Speaking with Obidumbie Adu Kumi on Asempa FM, the Ghanaian dancehall artiste claimed Joe Mettle wants to use him to revive his career.

“He wants to pay back what you people call beef. If that is what he wants…You know he is not popular so he wants to use me to be popular so if that is all he wants Puom Music can do that for him.

“We are talking about the music industry, you say Christian fraternity. What Artiste of the Year? The Artiste of the Year that was given to him is fake. He should sit and listen to me’mpaebo and compare it to his other songs and see if it matches up to his songs. As for Rasta, if you bring your pastor stuff I will beat you hands down,” he averred.

“I’m shocked that he could go and sit there and engage in a concert party. Someone who does gospel should not engage in such jokes. If you look at Cecilia Marfo and Esther Smith they didn’t joke so don’t bring those jokes to my side,” Ras Kuuku added.