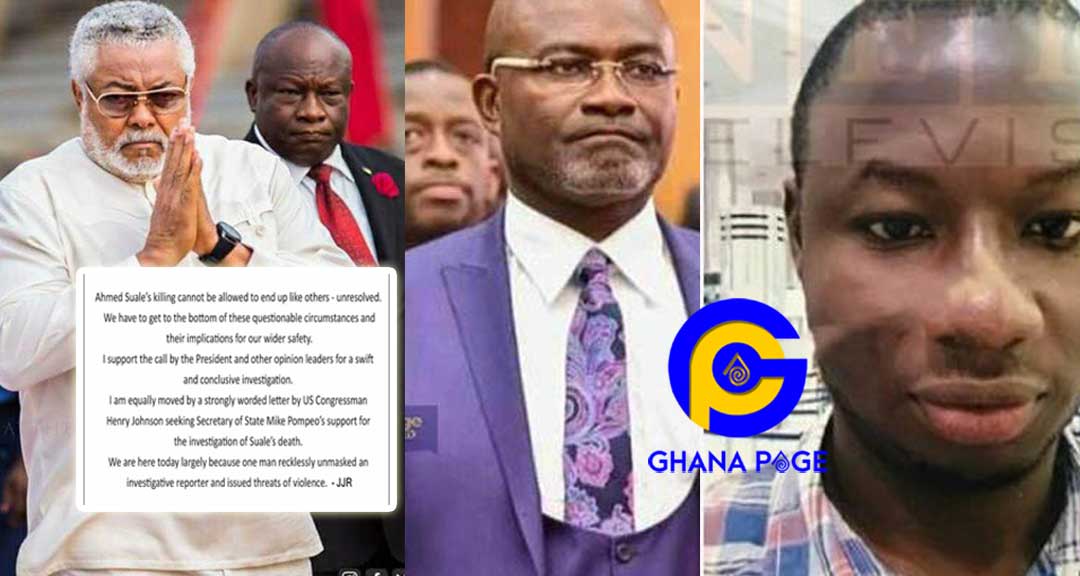 The former president of Ghana, Jerry John Rawlings has accused Hon. Kennedy Agyapong of indirectly and directly causing the death of the late Ahmed Hussein-Suale, the worker of Tiger Eye PI who was shot dead on Wednesday Night.

According to the longest-serving leader of Ghana, the reckless attempt of Kennedy Agypong to uncover the undercover journalist and violent speech directed at workers of Tiger Eye PI led by award-winning journalist, Anas Aremeyaw Anas facilitated the murder of Ahmed.

Jerry John Rawlings today, 19th January 2019 took to his official Twitter handle to express his disappointment with the Assin Central Member of Parliament and also to urge the police to swiftly solve the murder.

Papa J as the late president is affectionately called tweeted:

“Ahmed Suale’s killing cannot be allowed to end up like others – unresolved. We have to get to the bottom of these questionable circumstances and their implications for our wider safety. I support the call by the President and other opinion leaders for a swift and conclusive investigation. I am equally moved by a strongly worded letter by US Congressman Henry Johnson seeking Secretary of State Nike Pompeo’s support for the investigation of Suale’s death. We are here today largely because one man recklessly unmasked an investigative reporter and issued threats of violence”.

Ahmed, a worker of Tiger Eye PI was murdered on the Night of Wednesday, 16th January 2019 in his car by two unknown assailants on a motorbike. He was shot twice in the chest and one on his neck.

Hon. Ken did not end there. He went ahead to order people to beat him when he shows up at his work premise and wherever they meet him. He promised to handle whatever issues that come from that assault. He went ahead to show the area where he lives.

However, since Ahmed was murdered and Kennedy Agyapong was mentioned by the majority of Ghanaians including Anas as a person of interest, he has denied all knowledge of the murder as expected.