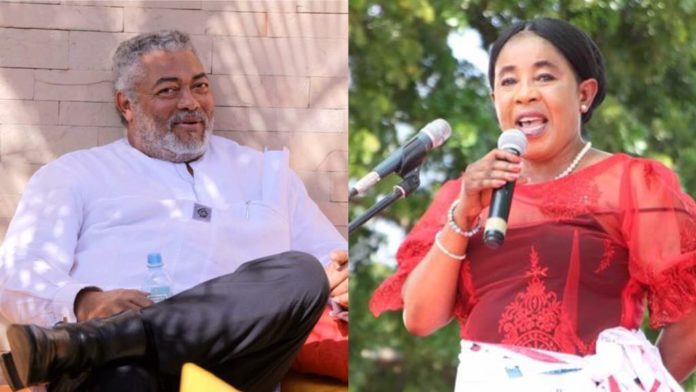 Although the Deputy National Chairperson of the opposition NDC is an outspoken person who never allows anybody disrespect her either from her own party or from their rival NPP, she ‘met her meter’ today when former president Jerry John Rawlings told her to stop bleaching because she is becoming to fair.

Celebrating the 39th anniversary of the June 4th uprising which was held at the Madina Social Welfare, Jerry John Rawlings who stood to address the audience told Anita Desoso right in front of all the audience to stop using those creams which keep lighting her skin because is too bad.

Before Papa J as Rawlings is affectionately called by most Ghanaians spoked, Anita Desoso knelt down and begged him to forgive the sins of her NDC. Rawlings for years now has been bashing his own party for neglecting the core values of the party. The Deputy National Chairperson of the NDC said:

“Founder, I know your children we have erred and I also know that you are a human being and you have also done something maybe it is not right. And I was so happy when I heard you say that when you bought a statement out, rendering an apology – you are a hero. You are a hero.

So, I will take this opportunity on behalf of the party to kneel down before my dad – please forgive us. Let us come together to build this country”, Anita Desoso added.

But when former President Jerry John Rawlings mounted the podium to speak he warned her about her skin color change. JJ Rawlings said:

“She is getting too fair. ‘Y3ngyai sa samina no na 3ny3’, (to wit, let us stop using that bleaching soap because it is bad).”

“She said I am his father and so let me tell her what I want to say”, Rawlings sternly warned her about bleaching.