Yaa Jackson walks away with a saloon car, money and other juicy agreements from the Record label owned by Ray Moni 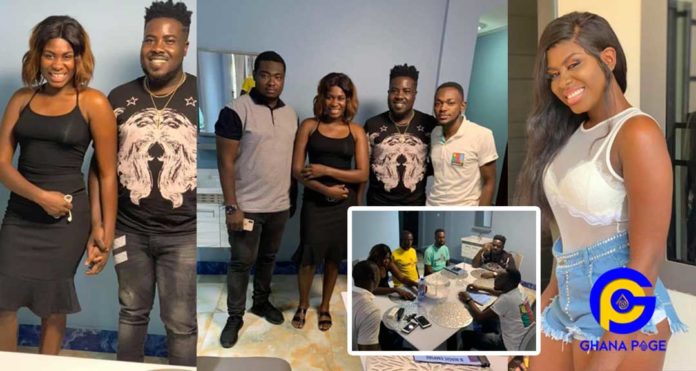 Besides the number of years, she has been signed not many details of the contract were made available to the media at the signing but Ghpage.com is reliably informed it is a very juicy contract and Yaa Jackson is very comfortable with it.

Among other things, Yaa Jackson walks away with a saloon car, a huge sum of money and others. The signing went down today, 15th February 2019 at Kumasi.

Present at the historic signing was Ray Moni, the boss of B Magic Empire and his team. Maame Yaa Jackson wearing a gorgeous black straight looking stunning was accompanied by her father, Mr. Jackson K. Bentum, and her team.

Speaking at the signing, Ray Moni revealed his main aim of this deal is to project Yaa Jackson to the world by providing her with all the resources she needs.

According to Ray Moni, considering all that Yaa Jackson, the “Tear Rubber” hitmaker has achieved on her own, the coming of B Magic Empire will astronomically project and position her to take over the country with her amazing talents.

Yaa Jackson on her part thank B Magic Empire team and Ray Moni for spotting her talents and coming on board to push the Yaa Jackson brand.

Speaking to Ghpage.com after the event, Ray Moni said:

“B Magic Empire wants to take her to a different level. We will start by shooting a world-class music video for a banger Yaa Jackson will be releasing soon. We will also start planning for the launch of her much-awaited album. Ghanaians and the world should watch out for the young songstress.