Must Read: 5 Most Controversial Things Angel Obinim Has Done In 2018 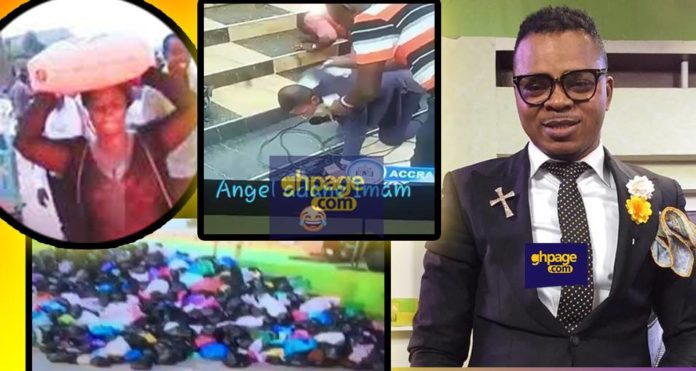 The founder and leader of International Godsway Church (IGWC), Bishop Daniel Obinim is one of the Ghanaian preachers who is often in the news for some controversial reasons.

From the way Angel Obinim conducts his church service to the type of miracles he claims to perform raises eyebrows almost every time.

Below is a list of some Five(5) most controversial things he has done so far in 2018.

Appearing in church in a woman’s wig:

Never have we expected to see Angel Obinim dress up as a female to come to church. Obinim was recently spotted in a new video wearing a woman’s wig in church. In the very short video, Obinim was seen wearing a long hair wig and gesticulating like a lady while his congregants shouted in amazement.

Turns into an ‘Imam’ to lead Muslim prayers in his church:

Also Read: Video: “My marriage was ordained by God” – Florence Obinim opens up on how she met Angel Obinim

Obinim in one of his videos endorsed cyber fraud which is known in local parlance as ‘sakawa’. In a video which went viral, Obinim disclosed that he was not going to advise people who engage in cyber fraud not to stop. According to him, the fraud victims, usually Europeans and Americans, are themselves fraudsters.

Making a woman carry a bag of cement for hours in exchange for lotto numbers:

Obinim has been claiming to be giving lotto numbers to his church members to stake and make a fortune and there have been many people who have testified to winning. But one woman was not lucky as she was made to carry a bag of cement for hours before she could have her own numbers to stake. This, Obinim explained, was a punishment for the woman because she refused to stake numbers she had been given earlier.

According to Obinim, the lady had asked him for lotto numbers last Sunday at church which he promised to give to her. Two days after, Obinim claimed, he appeared to the lady as a stranger and asked that the lady takes the lotto numbers she requested. This lady refused thus, he had to punish her before giving her new set of lotto numbers.

Obinim’s act raises questions as to why a ‘man of God’ will dabble in the business of lottery or encourage church members to do same and even punish some for not staking some numbers.

Claiming to have visited heaven to rebuke ‘Angel’ Gabriel:

Obinim who has been parading himself as an ‘angel’ for some time now. As if that is not blasphemous enough, in a new video claimed to have ascended to heaven to rebuke ‘Angel Gabriel’.

In a video which went viral, he is seen angrily exchanging words with the invisible creature in a strange language in the presence of his church members.

According to him, he was being interrogated and accused by the master for not ensuring that he and his partner, Angel Gabriel, did not properly execute their heavenly duties.