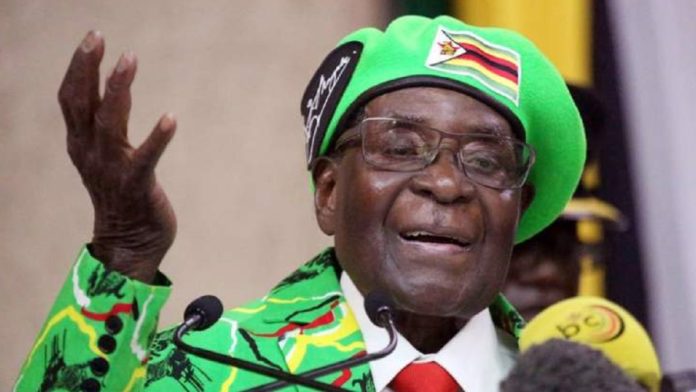 The former President of Zimbabwe, Robert Gabriel Mugabe was regarded as one of the world’s most controversial political leaders.

His death, however, came as a shock to the people of Zimbabwe and Africans as a whole. Ghpage.com brings you detailed facts about Robert Gabriel Mugabe.

Robert Gabriel Mugabe was born on 21st February 1924 at the Kutama Mission village in Southern Rhodesia’s Zvimba District. His father, Gabriel Matibiri, was a carpenter while his mother Bona taught Christian catechism to the village children.

Mugabe’s parents were strict disciplinarians and under their influence, he developed intense self-discipline and also became a devout Catholic.

Mugabe had five other siblings and at a very tender age, his father left his family in search of employment where he met another woman and had three children with her.

Mugabe was a student of the Kutama Collge and the University of Fort Hare. Mugabe excelled at school, where he was a secretive and solitary child preferring to read, rather than playing sports or socializing with other children.

He was taunted by many of the other children, who regarded him as a coward and a mother’s boy.

In 1941 Mugabe was offered a place on a teacher training course at Kutama College and because his mother couldn’t afford the fees he began teaching at his old school earning £2 per month which he used to support his family.

Robert Mugabe’s first wife Sally Hayfron Mugabe was a Ghanaian and was described as Mugabe’s confidante and an only real friend.

The got married in 1961 and they had a son Michael Nhamodzenyika Mugabe who died on 26th December 1966 from cerebral malaria in Ghana while Mugabe was in prison.

Sally was a trained teacher who asserted her position as an independent political activist and campaigner.

Sally Hayfon Mugabe died in 1992 from a chronic kidney ailment.

While married to Sally Hayfron, Robert Mugabe began an extra-marital affair with his secretary Grace Marufu, who was 41 years his junior.

In 1988, Grace had a daughter for Mugabe named Bona and in 1990, a son called Robert. The relationship was kept a secret from the Zimbabwean public but his wife Sally was aware of it.

After Sally’s death, Mugabe and Marufu were married in a large Catholic wedding ceremony on August 1996.

As First Lady of Zimbabwe, Grace gained a reputation for indulging her love of luxury, with a particular interest in shopping, clothes, and jewelry.

These lavish shopping sprees have led to her receiving the nickname “Gucci Grace”. She too developed a reputation for corruption.

Robert Mugabe Junior and his younger brother Chatunga Bellarmine are known for posting their lavish lifestyle on social media, which has drawn accusations from Tendai Biti that they are wasting Zimbabwean taxpayers’ money.

It is known that Mugabe and his wife Grace own huge mansions all over the world. One of his mansions in Zimbabwe is estimated to cost about £5 million.

The beautiful mansion has about 25 bedrooms and has two lakes in its 44 acres landscaped grounds.

He was a Zimbabwean revolutionary and politician who served as Prime Minister of Zimbabwe from 1980 to 1987 and then as President from 1987 to 2017.

He chaired the Zimbabwe African National Union (ZANU) group from 1975 to 1980 and led its successor political party, the ZANU – Patriotic Front (ZANU–PF), from 1980 to 2017. Ideologically an African nationalist, during the 1970s and 1980s he identified as a Marxist–Leninist.

He identified as a socialist after the 1990s. His policies have been described as Mugabeism. On 6 November 2017, Mugabe sacked his first vice president, Emmerson Mnangagwa. This fuelled speculation that he intended to name Grace his successor.

Grace was very unpopular with the ZANU-PF old guard. On 15 November 2017, the Zimbabwe National Army placed Mugabe under house arrest as part of what it described as an action against “criminals” in Mugabe’s circle.

On 19 November, he was sacked as leader of ZANU-PF, and Mnangagwa was appointed in his place.

Mugabe was hospitalized in April 2019, making the last of several trips to Singapore for medical treatment.

He died on 6 September 2019, at the age of 95, at Gleneagles Hospital in Singapore, at about 10:40 am, according to a senior Zimbabwean diplomat.

The Singaporean Ministry of Foreign Affairs is working with the Zimbabwean Embassy for the arrangements of his body to be flown back to Zimbabwe.