This is the reason why Afia Schwarzenegger is fuming over NAM1 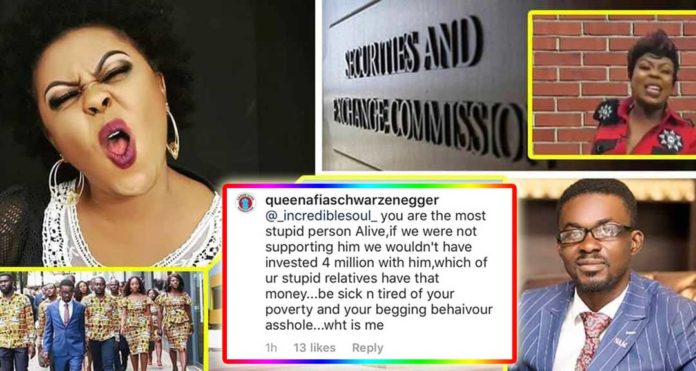 Well, Ghpage.com has just found out why Afia Schwarzenegger is pissed and throwing tantrums on social media.

According to the controversial media personality, her mother invested an amount of GHS 4 Million with Menzgold and currently, she is desperate and has no idea how she will retrieve the money.

Afia Schwarzenegger explained that they were hoping to hear something good on the 19th September deadline set by Menzgold themselves but only to wake up to another deadline of 28th September.

Afia Schwarzenegger explained that although she warned her mother not to invest with Menzgold because it’s a scam, she went ahead and did it but she can’t sit and watch her mother’s money taken by NAM1 just like that.

In the video which is fast going viral early this morning, Afia Schwarzenegger called on people who are known to be closer to the boss of Menzgold to caution their boss because she and her family will never be taken for granted by him.

Afia Schwar who had obviously not slept the whole night mentioned names such as Rozy, NAM1’s wife, MenZgld PRO George Quaye, Nana Addo, and others and asked them to do something about NAM1 as soon as possible.