Medikal and Sister Derby’s breakup caused by a text message from Fella?

Finally revealed: This is exactly what caused Medikal and Sister Derby's breakup [Video] 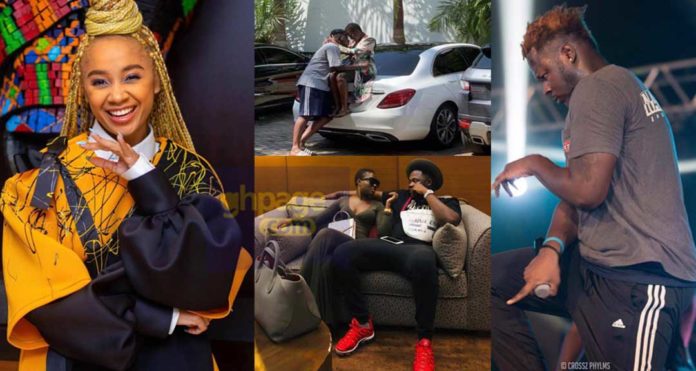 A lot of speculations have followed the breakup of Sister Derby and Medikal since the news broke some weeks ago. There have been rumors that Medikal got fed up with Derby’s inability to cook and decided to walk out of the marriage.

Others too have suggested Fella Makafui Snatched Medikal with her huge backside and sweet Ewe Toto whiles other shared the strong believe Fella Makafui may have juju Medikal.

SEE ALSO: Medikal explains why he fell in love with Makafui after 5yrs of Friendship

Well, Ghpage.com has discovered what may exactly have caused the breakup between Samual Frimpong aka Medikal and Sister Derby aka Ghana Jollof.

Apparently, the foundation of the “Too Risky Love” crumbled with a love text message from no other person to Medikal than our very own Yolo star actress, Fella Makafui.

In an interview with Berky on Joy Prime’s E with Becks which took place a few months ago, Deborah Vanessa revealed that they had their biggest relationship fight when she sighted a text message from Fella Makafui to Medikal.

At the time, she thought they were just friends despite the numerous speculations and proofs that were staring right in her eyes. She confronted Medikal about the text message and demanded explanation which shocked Medikal because she has never done that before.

SEE ALSO: I never meant to be enemies with Sister Derby after the breakup-Medikal

When asked who the message from, Sister Derby confessed it was from Fella Makafui and she went on to talk about how people have informed her about compromising positions they have sighted her now ex-boyfriend, Medikal and Fella Makafui but she always thought they were just friends.

This new revelation makes nonsense of Medikal’s statements that he started dating Fella Makafui after he broke up with Sister Derby when in fact, Fella was actually the cause of the breakup. We can now confidently say Fella Makafui boldly snatched Medikal from Sister Derby with this new evidence.

Sister Derby has released a dissing song for Medikal and Fella Makafui. In the song, she revealed that Medikal saved Fella’s contact as Carpenter when they were dating. I guess that is why she never found out until it was just too late.

SEE ALSO: Medikal explains why he fell in love with Makafui after 5yrs of Friendship