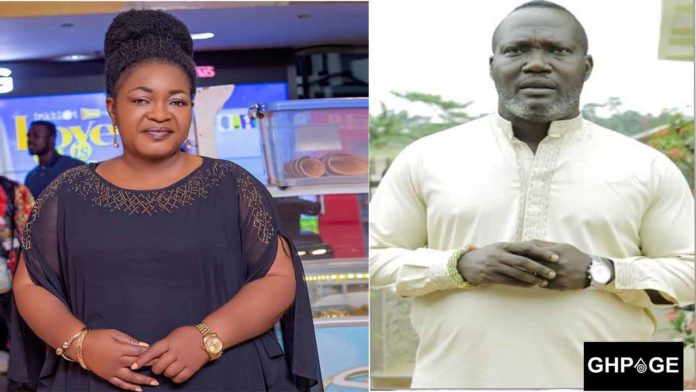 In 2017, rumours spread about an amorous relationship between Kumawood actors, Christiana Awuni and Bishop Bernard Nyarko.

The two, however denied all these claims explaining that they are just good friends with no strings attached.

Well, after the sudden demise of Bishop Bernard Nyarko, the rumours about their relationship rose again and how the two were practically living together.

Dada Santo popularly known as Oboy Siki also revealed that the two lived together at Ejisu in the Ashanti Region for many years.

The relationship between these two lovebirds ended after Bishop Bernard Nyarko decided to quit acting and focus on preaching the word of God.

Dada Santo explained that Bernard Nyarko ended the relationship to focus on the works of God which broke Christiana Awuni’s heart.

This, according to him was the reason why the two didn’t get married even though they were in love.

ALSO READ: Bernard Nyarko’s mother speaks for the first time after the demise of her son

Dada Santo also disclosed that Christiana Awuni was the only one who was allowed to first Bernard Nyarko when he was ill due to their relationship.

Bishop Bernard Nyarko passed away on Saturday, 2nd May 2020 after battling a short illness.

The one week celebration was recently held at the late actor’s residence, Lakeside Estate at Ashaley Botwe in Accra.

Celebrities such as Christiana Awuni, Nana Ama McBrown, Maame Serwaa, Sumsum Ahuofedua and several others were present to mourn with the family.

The final funeral rites of the late Bishop Bernard Nyarko is not known yet but stay logged on to Ghpage.com for more updates.