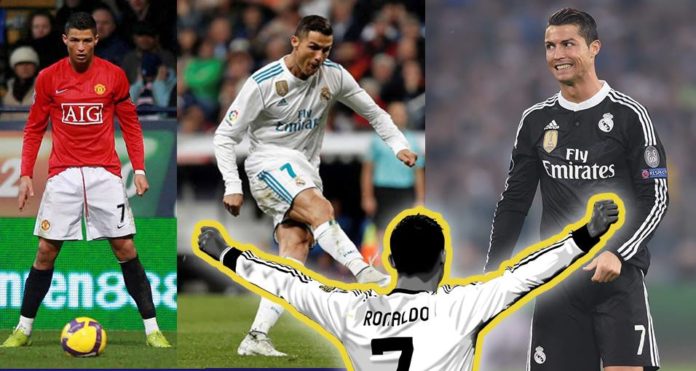 The 33-year-old is the only player who wears a long-sleeved jersey in the Portuguese national team.

For around the last decade, Cristiano Ronaldo has worn nothing but his now signature long-sleeves, and that makes him an exceptional player from his national team.

Through most of his time with Manchester United and then to Real Madrid, the Portuguese star has stuck to this – except for a few rare occasions.

Ronaldo’s amazing preference for long sleeved jersey has made people to start asking the reason why he prefers it to short-sleeved jersey. No one is completely sure whether it is superstition, a fashion statement or simply the jersey he feels most comfortable in.

But brand Ronaldo does have a certain ‘look’ – and some reasons behind wearing long-sleeve are;

To stay warm in Cold Weather

To help against turf burns when they dive

Potentially the turning point could’ve been the painful Euro 2004 and World Cup 2006 campaigns, both of which ended with Ronaldo in tears on the pitch.

READ ALSO: Evangelist Kwasi Nyarko is beaten and stripped for seeing his ex-girlfriend

He wore short-sleeves in the next two international tournaments, which were a failure – before making the switch for Euro 2012, where Portugal once again crashed out in a semi-final.

Whether it is superstition or fashion, Ronaldo’s legend continues to grow thanks to his incredible exploits on the pitch.

His incredible hat-trick against Spain showed that he’s turned up meaning business in Russia – and this could give him the nod to be tipped as the best-sportsman in the coming days.

A High School principal has been suspended by the authorities after he saying that legendary basketball player Kobe Byant and his daughter...
Read more
World

Its been 4 days since the painful demise of Basketball superstar Kobe Byrant and his 13-years old daughter Gianna who died in...
Read more
International Sports

Kobe Bryant, the NBA superstar has been confirmed dead. He died in a plane crash in Calabasas this Sunday morning. According to reports, Kobe Bryant...
Read more
World

The richest woman in Africa known as Isabel dos Santos has been fingered in stealing allegations according to investigations by the BBC...
Read more
International Sports

Danny Ings, 27, is a Centre-Forward for Southampton FC in the English topflight league. He has 13 goals and an assist credited...
Read more